Team Plan B is the only Canadian team left in the Google Lunar Xprize competition. 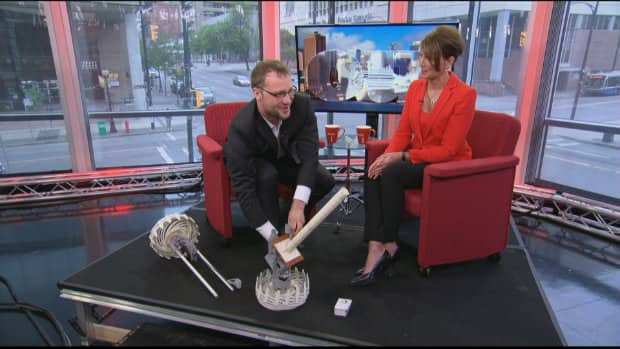 5 years ago
4:28
The only Canadian team to remain in a world wide competition for new space tech 4:28

The only Canadian team left in a Google-led international competition to send a rover to the moon has high hopes for the $20-million grand prize.

The team, named Plan B, is one of 16 teams left in Google Lunar Xprize, a competition that challenges teams to be the first to have their rover make it to the moon, have it travel 250 metres and broadcast high-definition videos and images back to Earth.

What we're after is to really break perceptions of what is possible.- Sergi Dobrianski, Team Plan B.

"The prize itself is nice to have  ... what we're after is to really break perceptions of what is possible," said Sergi Dobrianski, a Vancouverite who is part of the team.

Dobrianski wants to inspire engineers, inventors and entrepreneurs across Canada with their project and have the courage to pursue their own dreams.

"There's a lot we still need to learn about the moon, there's a lot of technology that can be generated out of this," said Dobrianski.

Team Plan B is a family affair with Sergei's dad Alex Dobrianski heading the project.

"It's good because we have no filter between him and I, if it's a bad idea he will point it out and we'll just move forward with it," said Dobrianski.

Although it started as a family endeavour, it has since grown to include many members.

"There are more people now involved, recently more members have joined. Since 2011 more than 40 people have touched this project," said Dobrianski.

As with the other teams competing, Team B was featured in a documentary on YouTube produced by, Hollywood director, J.J. Abrams.

One of the challenges of the competition is to be completely privately funded with little help from governments. Dobrianski was working part-time up until recently when he made the decision to take a sabbatical from work.

"We are right at the finish line here and Canada has a chance in the competition," said Dobrianski.

Plan B is currently working on their sixth rover model, which weighs four kilograms and is made completely out of carbon fibre.

Though competition ends in 2017, Dobrianski said the that is only the beginning.

"The real work would begin and we're shooting towards our vision and that vision is to start working with the materials, the lunar soil for any 3D printing or any other application," said Dobrianski.

In the video above, Dobrianski talks to Our Vancouver host Gloria Macarenko about the Google Lunar XPRIZE challenge and what he hopes to achieve through the competition.