A Vancouver drug trafficker has been killed in a daylight shooting outside his parents' home just months after he was released from prison. 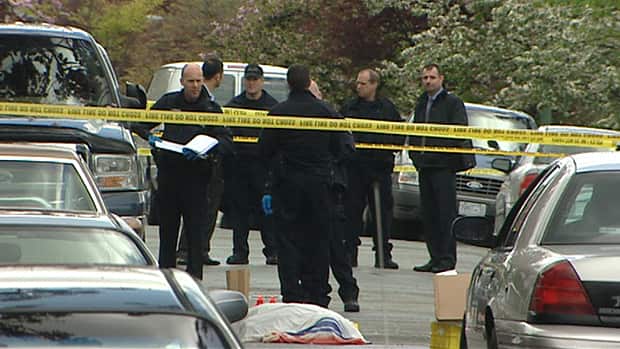 A Vancouver man well-known to police as a drug trafficker with extensive gangland connections has been killed in a daylight drive-by shooting outside the home of his parents.

Although police have not released an official confirmation, sources have confirmed the victim was Ranjit Cheema, who was gunned down while sitting in his SUV in the 1100 block of East 61st Avenue about 9:30 a.m. PT Wednesday.

Witnesses said they heard as many as seven shots.

Shortly afterwards, the street was cordoned off by police and a body could be seen lying under a tarp as police searched the area around the nearby SUV.

Police also launched an intensive search for a suspect vehicle, according to Const. Jana McGuinness, but no description has been released of the vehicle.

Cheema was released three months ago from prison in California, where he’d been convicted for his role in the attempted sale of 200 kilograms of heroin.

The shooting comes days after police issued a public warning about the possibility of escalating gang violence.

An attempt was made to kill Cheema in 1995, when he was shot five times in the chest and abdomen outside a Vancouver karaoke bar.

He was in a coma for six weeks after the shooting.

Cheema was an associate of several other gangsters who also were shot to death, including Bindy Johal who died in 1998, Mike Brar in 2000 and Robbie Kandola in 2002.

"He's like the grandfather of gangsters, him and Gisby," Spencer told CBC News Wednesday. "To live that long, it’s almost unheard of. The clock is ticking on all these guys."

With files from the CBC's Aarti Pole and Natalie Clancy