Vancouver first city to use recycled plastic in asphalt

Vancouver will be the first-ever city to use blue box recycled plastics as asphalt mix on the city's roads, in a move engineers say is a green step forward.

Recycled plastic will cost more, but has long-term savings 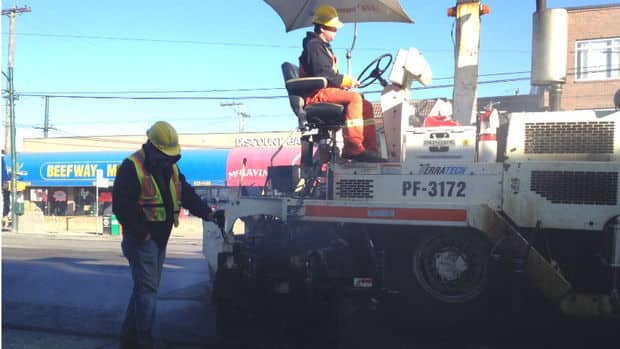 8 years ago
1:55
Vancouver has become the first city to use blue-box recycled goods in road construction 1:55

Vancouver will  be the first-ever city to use blue box recycled plastics as asphalt mix on the city's roads, in a move engineers say is a green step forward.

Old plastic milk jugs, yogurt containers and other post-consumer recyclable material will be ground up and made into a wax which then used as a warm mix for asphalt.

"It's actually a lot like crayon wax and what we are doing with this is putting it in the asphalt which we are putting down today," explained Vancouver city engineer Peter Judd at a Kingsway paving site Thursday morning.

For asphalt to be laid properly, it needs an additive to reduce the viscosity, or make the material go down smoother.

This mix makes up approximately one per cent of a typical asphalt batch. The raw cost of the recycled plastic is three per cent higher than typical asphalt mix, but there are significant savings over time, said Judd.

The city is piloting the mix in several parts of the city, and Judd said they believe it will be as durable as what's currently used.

The recycled plastic mix is now sourced from Ontario, but the city hopes to produce it locally in the future.