A large fire broke out in East Vancouver Wednesday night, lighting up the sky and sending plumes of smoke rising into the air and surrounding areas.

The fire sent thick plumes of black smoke high into the air, visible from as far as City Hall 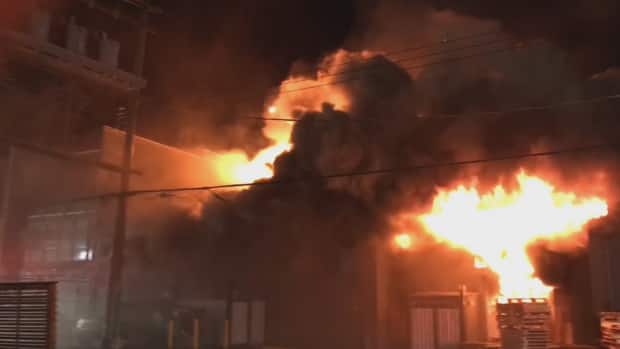 3 years agoVideo
0:24
The Hastings Street fire sent plumes of black smoke all over the city. 0:24

A large fire was raging in East Vancouver Wednesday night, lighting up the night sky and sending plumes of smoke rising into the air.

The fire broke out just before 10 p.m. PT at an industrial building just off Hastings Street, between Clark Drive and Mclean Drive.

It sent thick plumes of black smoke high into the air, visible from all over the city.

'A chemical cocktail that one could never imagine'

Assistant Chief Kevin Wilson was on scene at the fire and said they had to call the hazmat team in for a short period of time after they became aware of some potentially dangerous chemicals in the building.

"With the print shop you've got all kinds of inks and acetones and cleaning compounds, extensive amounts of paper," said Assistant Chief Kevin Wilson.

"A chemical cocktail that one could never imagine is all together with massive amounts of heat."

Wilson also warned residents of the area to shut their windows for the night due to the presence of thick smoke.

"Elderly and young children, anyone with a compromised immune system, please keep your windows and doors closed and avoid this smoke," he said.

Wilson confirmed there was no one in the building when his crews first arrived.

Fire officials said the three-alarm blaze drew more than 15 fire trucks and 65 firefighters to the scene.

They said they're not sure how the fire started, but will be investigating after it's fully contained.

With files from Liam Britten and Gian-Paolo Mendoza