Vancouver to formally apologize to Chinese community for past discrimination

Mayor Gregor Robertson will make the apology on April 22 as part of a larger Chinatown Culture Day event.

Vancouver Mayor Gregor Robertson will formally apologize next month for past discrimination against residents of Chinese descent.

The apology will acknowledge the wrong-doings of past legislation, regulations and policies of previous city councils.

"The historical wrongs of Vancouver City Council need to be addressed, particularly as the city is focused now on being a city of reconciliation, and that extends beyond our First Nations to people of other cultures who faced racism and discrimination in the past,'' Robertson said in an interview Monday.

"This is an important step to address that historic travesty and move forward.''

Robertson will make the apology on April 22 as part of a larger Chinatown Culture Day event.

Robertson said delivering the apology within the community at a public event rather than at a government building would help convey the city's "intention to make sure that Chinese culture is supported and embraced.''

Between 2016 and 2017, the city established an advisory group of Chinese and non-Chinese experts and community leaders to help guide the development of a formal apology, which was approved by council in November.

Their report said residents of Chinese descent weren't allowed to vote when the city incorporated in 1886 until 1948, after veterans of the First and Second World Wars lobbied for voting rights.

The City of Vancouver also advocated for discriminatory policies like the federal head tax, and barred Chinese-Canadians from civic employment between 1890 and 1952.

City policies and practices also included various attempts at segregation in schools, public spaces like swimming pools, and other public areas including residential housing, hospitals, and even cemeteries.

Because of restrictions at local cemeteries, Chinese residents had to be returned to China for burial, the report said.

In 2010, the City of New Westminster became the first B.C. municipality to formally apologize to Chinese-Canadians for past discrimination.

In 2015, Chinese-Canadians received an apology from former premier Christy Clark on behalf of British Columbia for more than 100 racist laws, regulations and policies of past B.C. governments.

She pointed to Chinese immigrants' contributions to building the national railway system, noting that one Chinese worker died for every mile of track laid between Vancouver and Calgary. 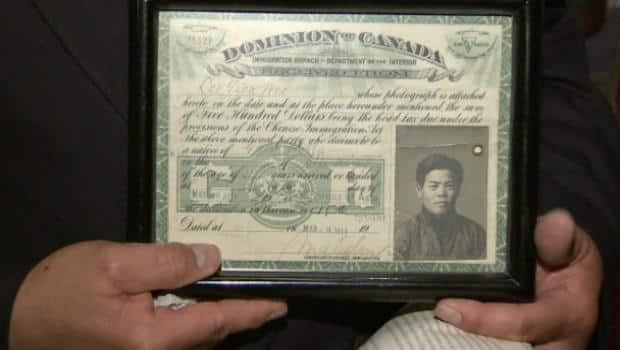 Chinese community gets apology from B.C.

6 years ago
2:06
The government of British Columbia formally apologizes to the Chinese community for historical wrongs 2:06

In 2006, the federal government offered an apology for the head tax imposed on Chinese immigrants and included $20,000 in compensation for families or surviving people who paid the tax.

Thousands of Chinese immigrants arrived in Canada starting in the 1880s to help build the country's railways, but starting in 1885, the federal government imposed a head tax of $50, which rose to $500 in the early 1900s.