Vancouver Aquarium whales should be phased out, mayor says

The mayor issued a statement praising the aquarium for its conservation work and educational activities, and noting that is is a significant tourist draw, but said he's personally against the idea of having cetaceans in captivity. 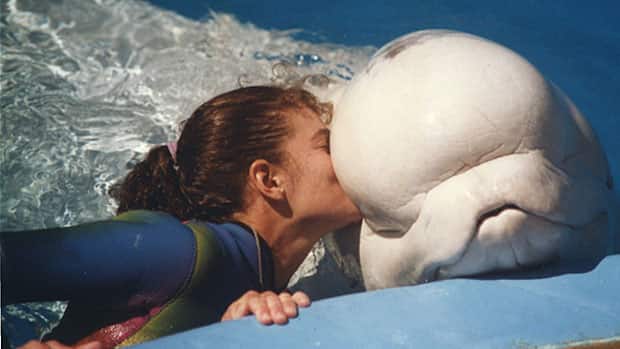 7 years ago
2:09
Former SeaWorld trainer now against having whales in aquariums 2:09

A hot civic debate is stirring once more over whether the Vancouver Aquarium should be allowed to keep whales and dolphins in captivity.

Mayor Gregor Robertson said he wants them gone, in time, but doesn't want the issue to go to a referendum.

Earlier this week, the mayor issued a statement praising the aquarium for its conservation work and educational activities, and noting that is is a significant tourist draw, but said he's personally against the idea of having cetaceans in captivity.

“My personal view is that the Vancouver Aquarium should begin to phase out the holding of whales and dolphins in captivity," Robertson said.

"I’m hopeful that the aquarium and the park board can work collaboratively and come to an agreement on how to achieve this with a dialogue and review that will be informed, thoughtful, and inclusive. I do not however support a city-wide referendum on the issue, as the ability to phase out the holding of whales and dolphins in captivity is within the Park Board’s authority.”

No position from Park Board

The Vancouver Park Board, which has final say over what goes on in Stanley Park, says it wants more information before making a decision.

The chair of the park board said it's a nuanced dilemma, especially with an aquarium expansion project still underway.

"I don't think there's a single commissioner around our table that doesn't wrestle with the ethics," Aaron Jasper told CBC News.

In a statement released earlier Tuesday, Jasper said he would introduce a motion to have park board staff to create a public report on cetaceans in captivity and best practices in marine mammal rehabilitation.

"Dolphins and belugas at Vancouver Aquarium play a direct and vital role in engaging people in key ocean issues," the aquarium said in a written statement Wednesday.

"In addition, with the rapid environmental changes in the Arctic where belugas live, continued research, much of which must be done in marine science centres like the Vancouver Aquarium, is critical to their future."

The aquarium also note that its facility is the only one in Canada that can rescue, rehabilitate and provide a long-term home for marine mammals that otherwise wouldn't survive in the wild.

The aquarium also says it committed in 1996 to never again participate in the wild capture of whales for display — a commitment that was formalized in a park by-law, which is due for review in 2015.

The issue of whether whales belong in captivity has come to the fore again since the release of 'Blackfish,' a documentary about the captive orca Tilikum, which was involved in the deaths of three people, including one trainer at the defunct Sealand of the Pacific exhibit in Oak Bay near Victoria in 1991.