Vancouver Aquarium beluga may have died of cancer

Officials at the Vancouver Aquarium say Kavna, believed to be the oldest beluga whale at any accredited aquarium in North America, may have died of cancer. 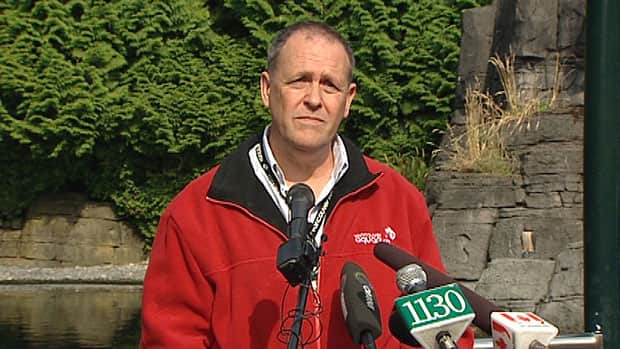 Officials at the Vancouver Aquarium say Kavna, believed to be the oldest beluga whale at any accredited aquarium in North America, may have died of cancer.

The 46-year-old whale died at about 3 p.m. PT Monday afternoon.

Kavna was the inspiration behind the children's hit Baby Beluga by Canadian singer-songwriter Raffi.

At a news conference on Tuesday, officials said Kavna was extremely healthy throughout her life but her health began to decline in recent weeks.

Officials say Kavna didn't respond to treatment, and it appears cancerous lesions found on her reproductive tract may have contributed to her death.

"Obviously, it’s a real big loss for all the trainers, everybody, including myself," said Brian Sheehan, the aquarium's curator of marine mammals.

"This morning driving in, I was just thinking about all the different things I’ve done with her."

Sheehan, who worked with Kavna for more than 20 years, said she was an interesting mammal who hand-picked which trainers she was willing to work with.

"She trained a number of trainers through the years," he said. "She was definitely in charge and would decide what to do."

According to the aquarium, beluga whales in the wild are believed to live until about 30 years old.

"At approximately 46 years old, Kavna was considered to be at the end of her life and had lived a long and healthy life in the care of the aquarium's marine mammal care team," the aquarium said in a statement.

"Kavna will be missed by all who knew her. Loved meeting her in '79, the magnificent 16 yr old beluga whale who inspired Baby Beluga," the musician, whose full name is Raffi Cavoukian, wrote on Twitter.

"Kavna had a profound impact on me. Her voice is likely in the intro and close of the Baby Beluga recording," he added, saying he wrote the song for an imagined universal baby beluga.