Vancouver city councillors have passed an ambitious transportation plan that aims to increase the foot, bike or transit trips in the city from 44 to 66 per cent by 2040. 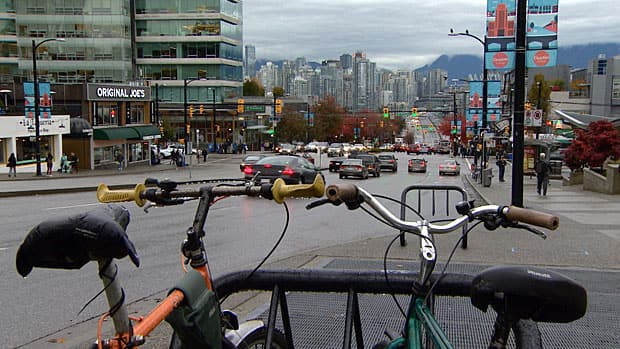 8 years agoVideo
2:06
The city of Vancouver passed a plan to encourage people to walk or cycle around town 2:06

Vancouver city councillors have passed an ambitious transportation plan that aims to increase the foot, bike or transit trips in the city from 44 to 66 per cent by 2040.

The controversial Transportation 2040 Plan was passed unanimously by councillors on Wednesday morning.

Coun. Kerry Jang says the plan is not a "war on cars" but a series of options to manage growth in the city.

It flags the busy Broadway corridor as a top priority for a new rapid transit line, along with improving public transit on Hastings Street, as well as 41st and 49th avenues.

More bike lanes and other cycling upgrades are also outlined in the plan.

The public consultation process for Transportation 2040 was one of the most extensive in Vancouver’s history, engaging over 18,000 residents, 944 online respondents, and more than 50 stakeholder groups over the past two years, according to the city.

"Vancouver needs to be taking action now, and after one of the broadest and most-engaging consultation processes in our city’s history, the 2040 plan represents a major step toward a transportation future that supports bold safety goals, the needs of a growing economy and a greener Vancouver," Mayor Gregor Robertson said in a written release.