An anarchist group appears to be taking responsibility for a fire early Wednesday morning at a housing complex under construction in East Vancouver. 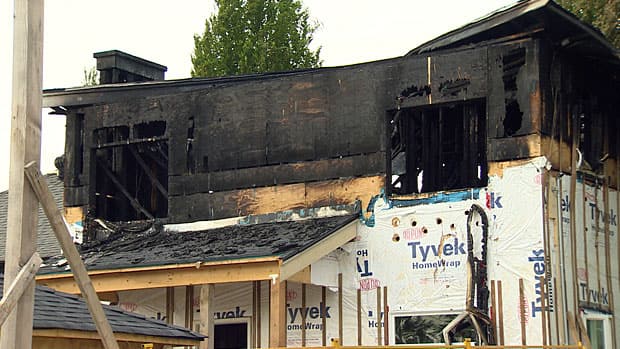 An anarchist group appears to be taking responsibility for a fire early Wednesday morning at a housing complex under construction in East Vancouver.

The warning "We'll be back" and a circle-A anarchy symbol were spray-painted on a portable toilet at the site of the fire.

Security guard Baljit Bassi has been tasked with patrolling the charred building on East First Avenue.

"You can see everything what happened here; some members stick the sticker here," he said, referring to the warning.

A posting on the Anarchist News website says someone claiming to be with the Anti-Gentrification Front, or AGF, is responsible.

"Last night, we burned down a yuppie development on 1st Ave. near Victoria," the posting says. "We wish and will create fear for developers in East Vancouver."

Earlier this month a group of masked protesters dressed in black marched through Vancouver's Downtown Eastside with flaming torches carrying a banner reading "Fire to the Condos" and marked with a circle-A.

Vancouver police, however, say they have not linked Wednesday's house fire to a particular group.

On Thursday, Vancouver Mayor Gregor Robertson said the fire was of "significant concern" especially in light of the "extremist claims made online."

"Innocent lives could have been lost," he said in a statement. "Violence of any kind will not be tolerated in the city of Vancouver, and any criminal acts will be investigated and responded to with every resource at our disposal."

Developer Paul Dhaliwal believes another house he had under construction just a few blocks away was deliberately torched about six months ago.

"People saw a kid out there and what they saw was this fire being lit, and then this kid ran out," Dhaliwal said. "The matches were laying on the floor. We thought it was some kids but it wasn’t a kid."

Dhaliwal said squatters had been living at an empty house on the site for years and kept returning, despite neighbours' attempts to get rid of them.

"This was a very old unsafe house that was falling apart and we were densifying it. We’re not taking a property away from someone; we are creating something that four families can live in," he said.

"This isn’t a mansion house. We were trying to make something that someone can afford to live in."

'They put us in danger'

Earlier this year, a posting on the same website that appeared to be from the AGF claimed responsibility for smashing the windows of Famoso Pizzeria on Commercial Drive.

The owner of Save On Meats on the Downtown Eastside was also sent a bizarre warning — a photo of a masked man with the establishment’s missing sandwich board sign.

Anti-gentrification protesters have also targeted Pidgin, a restaurant near Pigeon Park, since it opened.

Karen La lives next to the home set on fire on Wednesday.

"They put us in danger. That's what I'm pissed off about," she said. "They can have their own beliefs and their own thinking."