A B.C. union leader says the public should brace for "plenty of chaos" at Vancouver International Airport on Friday if the airport's contract talks with baggage handlers and runway crews fail tonight or tomorrow. 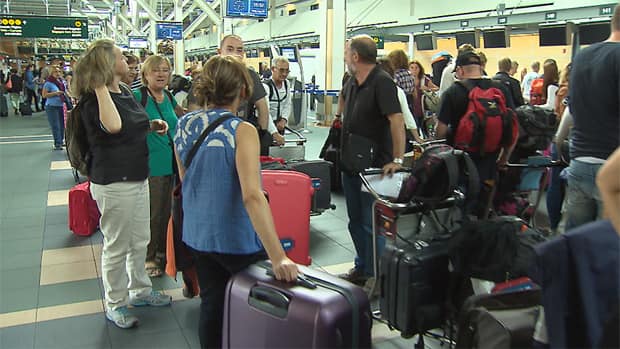 7 years agoVideo
2:06
Hundreds of Vancouver workers prepared to walk off job on Friday 2:06

A B.C. union leader says the public should brace for "plenty of chaos" at Vancouver International Airport on Friday if the airport's contract talks with baggage handlers and runway crews fail tonight or tomorrow.

The Public Service Alliance of Canada, which oversees the Union of Canadian Transportation Employees, issued a 72-hour strike notice Tuesday and went into last-minute negotiations with the Vancouver Airport Authority Wednesday morning.

Irene Lanzinger, speaking for the B.C. Federation of Labour, said about 340 workers, including customer service workers at international arrivals and runway maintenance crews, would walk off the job Friday morning.

Anne Murray, spokeswoman for the Vancouver Airport Authority, has said that she expects airport operations to run smoothly this long weekend, even if there is a labour disruption.

"If there are picketings, that's a normal part of this process; however, passengers should be reassured that there really won't be delays for them," Murray said.

Of the 340 workers who may strike, about twelve are deemed to deliver essential services, and won't be on strike, Lanzinger said.

"The essential service order has placed limits of the ability of the union to picket. So we won't see pickets everywhere but we will see them in a lot of places," she said.

However, other unionized workers may end up refusing to work at, or travel through, the airport Friday in solidarity with the striking union.

"We have a very strong culture in British Columbia of unions honouring each other's picket lines, because we understand that the way we make gains is sticking together," Lanzinger told CBC News.

"That's a fundamental principle of unions and we have a strong culture around that in British Columbia," she said.

The union is continuing to advise the public to contact YVR and their airline to check on the status of flights scheduled for the end of this week.

Unionized taxi drivers who spoke to CBC News say it could be up to their companies to decide if the drivers will continue to make trips to and from the airport in the midst of a strike.

With files from the CBC's Richard Zussman and Theresa Lalonde