Vancouver retailers are cashing in on the growing trend of people – young and old –sporting ugly Christmas sweaters to celebrate the holidays. 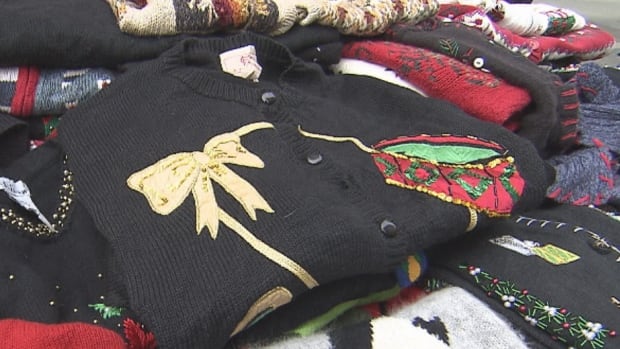 Vancouver retailers are cashing in on the growing trend of people — young and old — sporting ugly Christmas sweaters to celebrate the holidays.

Drew Heifetz, co-owner of F as in Frank, a trendy East Vancouver clothing store, says that in past five years, demand for ugly Christmas sweaters has “skyrocketed.”

“Well, of course, everyone loves ugly Christmas sweater parties. And in order to go to a sweater party, you need an ugly sweater,” Heifetz says.

“People will come in and not just buy one; they’ll buy 10 — for their whole family or for people at their office. The popularity just keeps growing.”

Heifetz says between his two retail locations, one in East Vancouver and the other in Toronto, he sells between 25,000 and 30,000 sweaters a year.

He has a team of pickers that scour locations across North America year round to hunt down the tackiest sweaters out there.

Heifetz has even started shipping ugly Christmas sweaters to Europe, as the trend goes global.

“If a sweater has anything to do with Christmas, we’ll sell it,” he says.

Customers shopping in Heifetz’s store on Sunday told CBC News that, with a sweater, “everyone kind of gets a little more crazy” and that they make for a great conversation piece.

Retailers are not alone. Some other locals are simply looking to maximize the holiday spirit.

Chris Boyd and Jordan Birch founded the ‘Now That’s Ugly Society,’ a group dedicated to celebrating the holidays while wearing atrocious sweaters. They’ve been hosting ugly sweater parties for over a decade.

“It’s a pretty awesome party — 1,100 people, we have live music, we have a DJ, we have a gospel choir. We have all the festive elements,” Boyd says.

The pair has even petitioned the City of Vancouver to declare an “Ugly Sweater Day.” They’ve been selling buttons in support of their campaign, and donating the proceeds to charity.

According to Heifetz, a sweater of your own will cost between $18 and $30, depending on much “flair” it has.

With files from CBC's Meera Bains