"It is one thing to want to go. It is another to pick up and leave," said American ex-pat David Drucker, who moved to Vancouver with his wife when George W. Bush won a second term in the oval office.

Man who left U.S. because of Bush says Americans won't flood here if Trump wins, despite what they say 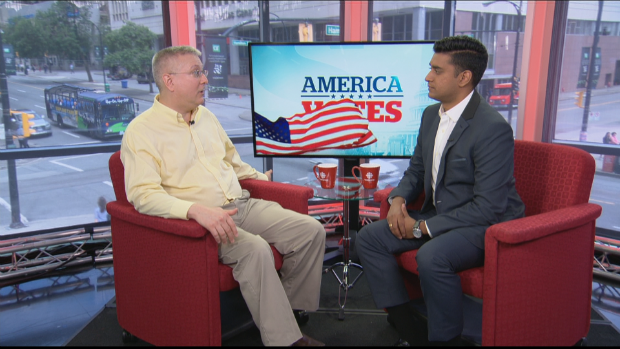 The divisive U.S. presidential race has led many Americans to announce that they intend to move to Canada if controversial Republican nominee Donald Trump wins the election.

But one American who moved to Canada after George W. Bush won a second term in office says that — even if Trump does become president there — he doesn't actually expect that many disappointed people will relocate.

"It is one thing to want to go. It is another to pick up and leave," said David Drucker, who moved to Vancouver with his wife Pam in 2005.

Drucker said the preparations of moving to another country — and the personal sacrifices — weren't easy, and said immigration policies have only become more stringent since he moved.

'How can I move to Canada'

Celebrities like Jon Stewart and Lena Dunham, as well as ordinary Americans, have expressed an interest in moving north if the billionaire wins in November.

Google data editor Simon Rogers reported on Super Tuesday that searches for "How can I move to Canada" had spiked 350 per cent on the search engine in the four hours when results came in showing strong support for Trump, even though Clinton also attracted massive support on the same night.

Searches for "Move to Canada" were even more impressive, rising over 1,000 per cent the following day.

Searches for "how can I move to Canada" on Google have spiked +350% in the past four hours <a href="https://twitter.com/hashtag/SuperTuesday?src=hash">#SuperTuesday</a>

Drucker said he and his wife decided to move to Canada after seeing Bush win a second term in the oval office in 2004.

"[Bush's] first term was pretty disastrous," Drucker said. "I thought, let's go to a place where they seem to have managed things a little bit better."

After seven years living and working in Canada, the Druckers became Canadian citizens in 2012.

When Barack Obama moved into the White House in 2008, kick-starting eight years of Democratic leadership, Canada's own political landscape had veered right with a Conservative majority government under Stephen Harper.

Nonetheless, the Druckers had made a home here and had no intention of moving back.

"People asked us, 'Are you going back, because things are swinging the other way here?' We really by that time said, 'No, we're not going back. We really like it here," Drucker said.

In the video above, Drucker tells Our Vancouver guest host Jason D'Souza what it means to move to another country because of one's political beliefs.