A high-rise hotel and condo project on Vancouver's West Georgia Street is being rebranded as the city's first Trump tower, CBC News has learned. 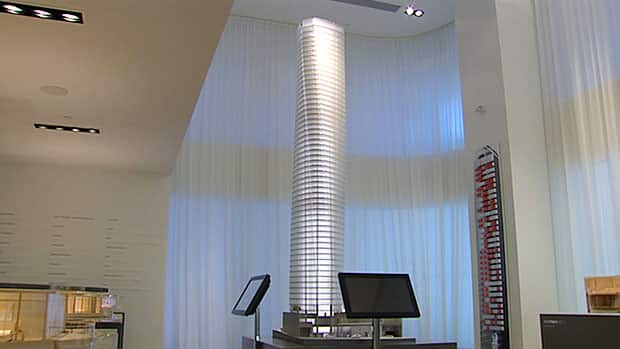 Trump Tower may be coming to Vancouver

8 years agoVideo
1:58
A deal is almost done to rebrand a twisting Georgia Street building as a Trump Tower 1:58

A high-rise hotel and condo project on Vancouver's West Georgia Street is being rebranded as the city's first Trump tower, CBC News has learned.

Developer Holborn Group is relaunching its Arthur Erickson inspired twisting tower under the Trump brand with condos priced around $1,600 a square foot.

When the project was originally launched before the global economic meltdown, the 60-storey tower, which will twist 45 degrees as it rises, was to feature a high-end Ritz-Carlton hotel on the lower floors.

Another 123 luxury condos were planned for the upper floors, priced between $2.5 million and $10 million, with the penthouse priced at $28 million.

But when the recession hit in 2008 the luxury market collapsed. The project was halted and early buyers were refunded their money.

The project was restarted in April 2012, with 290 condo units aimed at a lower price point, at the location on the 1100-block of West Georgia.

Trump has a similar project in Toronto. At 65 storeys, Trump International Hotel and Tower has put its stamp on that city, and the Vancouver project might do the same here.

But also like the Toronto project, Donald Trump and his daughter are not investing in the Vancouver tower, merely selling the Trump brand to the developer.

"We are naturally excited about Vancouver. It is a great city with tremendous access to the Asian market and we look forward to continuing to explore the potential of bringing the Trump flag to this location," said a statement released by the pair.

Marketing to international buyers was also the plan when the Residences at Hotel Georgia was promoted, but now that that project is built and 60 per cent sold, the majority of buyers turned out to be local.

"That luxury end of the market is recovering; whether it's recovered enough globally to support the absorption of this size of project is difficult to say,"

Either way, Vancouverites can expect the Donald may soon be in town, looking to trade in his Leafs jerseys for a Canucks one.