A bear trapped in Surrey, B.C., is not the bear responsible for attacking livestock in the area, conservation officials say.

Bear was tranquilized for tagging and relocation; trap will be redeployed on Surrey property 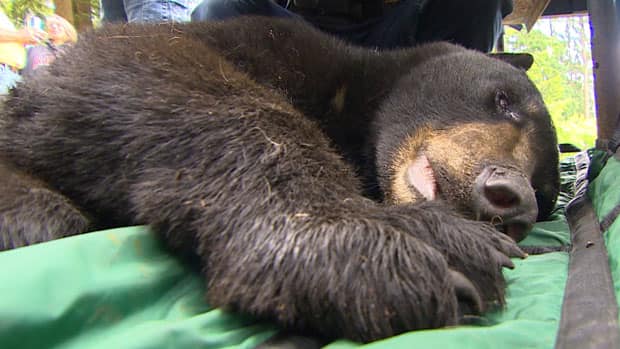 7 years ago
2:00
Caught bear not responsible for recent attacks on llama and goat 2:00

A bear trapped in Surrey, B.C., is not the bear responsible for attacking livestock in the area, conservation officials say.

The bear was tranquilized after it wandered into a trap set on George Hoffman's property, near the spot where an aggressive black bear killed one of his goats over the weekend.

"The dog started going wild, I could see his hair standing up," said Hoffman. "When I looked, I see the back door [of the bear trap] was closed, so he was obviously in there."

But officers say the four- to six-year-old male is not the animal that attacked a llama and killed a goat in the area around 176th Street and 92nd Avenue.

While this one will be tagged and relocated, the hunt continues for the aggressive, injured adult first seen on Friday.

"The average black bear goes and knocks over a garbage can. But this is not a garbage can bear. This is a real serious bear," Hoffman told the CBC on Monday.

Neighbour Jim Clark, who raises llamas on his acreage, said the bear attacked one of his llamas before he scared it off by shooting it in the shoulder.

Conservation officers say the bear will have to be put down once it's caught, because it has attacked livestock and could be a threat to public safety.

Meanwhile in Burnaby, RCMP and conservation officers are on scene near Burnaby Mountain Secondary, where three more bears have been spotted wandering around a residential area.

"It appears to be a mother and two young ones ... they have started making their way, [but] they initially went through the area looking for garbage," said Burnaby RCMP Cpl. David Reid.

"We're trying to usher them out of the area but they're not in a rush, so our police officers are there on site," he added.

Reid said police received a call Tuesday morning from a woman who said she saw the bears outside her horse barn.

It's unclear if these are the same animals that were spotted rummaging through garbage cans in the Cariboo Heights area near the Burnaby-New Westminster border earlier this month.

There is a family of bears that live in the greenbelt that have taken to foraging in the area, he said, reminding people to keep food and garbage well-contained.

Also this month, a Maple Ridge resident videotaped a bear standing on its hind legs and opening the door of a pickup truck.