TransLink has announced it has found nearly $100 million in new efficiencies over each of the next three years to help cover its funding gap. 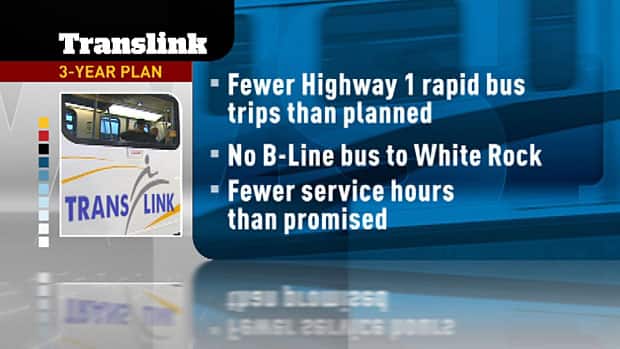 TransLink has announced it has found nearly $100 million in new efficiencies over each of the next three years to help cover its funding gap.

The Lower Mainland transit authority made the revelation as it laid out its three-year financial plan Monday.

Among the key projects that can now go ahead are the rapid bus lines for the Port Mann Bridge, although there will not be as many buses running as once planned.

There also will be upgrades to SkyTrain and a B-Line express bus service along King George Boulevard, and the yet-to-be-built $1.4-billion Evergreen Line is also still a go.

TransLink executive vice-president Bob Paddon says the authority has been able to find efficiencies, but there’s a limit to the projects it can undertake.

"This plan also acknowledges that our expansion is coming to an end. It's an important expansion. Evergreen Line, Highway 1, King George Boulevard. From here on in, TransLink is going to be working within its means."

The current plan is contingent on local mayors approving a $30-million property tax hike, which they have voted against in the past.

With files from CBC's Renee Filippone