A Vancouver parent, who gives blood regularly, is angry a Canadian Blood Services clinic wouldn't let her donate simply because she is transgender. 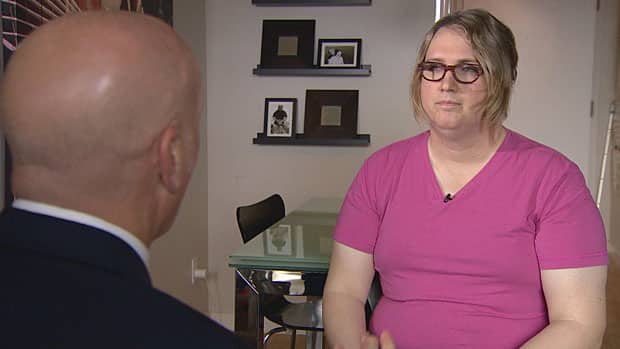 A Vancouver parent who gives blood regularly is angry a Canadian Blood Services clinic wouldn't let her donate simply because she is transgender.

Clayre Sessoms was turned away from the clinic in downtown Vancouver on Wednesday after being asked if she had had "the surgery" to change her gender.

"I went to donate blood, just like I did every other time and I went through their questionnaire and I met all of their criteria that was written down," Sessoms told the CBC.

Sessoms then underwent a one-on-one interview with a nurse, and declared the two hormonal drugs she is taking as she transitions, both of which are approved.​

Sessoms says the nurse then asked if she had undergone gender reassignment surgery. Sessoms, who has not had any surgery, asked why it was important and the nurse left the room, only to return and say they had to defer her donation.

"I was deeply hurt. I was kind of dumbstruck at first," said Sessoms, who made cellphone recordings of her subsequent interactions with blood clinic staff and published them online in a blog post entitled Bad Blood.

The nurse can be heard clarifying there is no medical concern but there were "no criteria" for transgender people.

Nurse: "The medications are totally fine."

Sessoms: "So you're deferring me because I'm transgender?"

When approached by the CBC, a spokesperson for Canadian Blood Services said they would not comment on the case for privacy reasons but did issue a statement.

"Canadian Blood Services does not exclude any potential donor based solely on gender, race, religion, or sexual orientation," said the statement.

"Any transsexual or transgendered individual is screened at our blood donor clinics according to the same standard eligibility criteria we use for all blood donors.

"In certain cases, a donor with a complex medical history may be referred to one of our medical staff for further assessment. This procedure is in place to protect both the donor and the patient."

The statement goes on to say that Canadian Blood Services’ first priority continues to be patient safety.

"We appreciate that a request for further medical consultation can cause distress for some donors, but we do this to ensure the safety of the blood system and it is not intended to reflect negatively on any individual."

Canadian Blood Services is still trying to recover from the days when Hepatitis C and HIV infected the blood supply in the 80s, and says it asks questions and follow up questions to protect patients.

Speaking to the CBC, Sessoms said she has given blood before and had donated without any problems in November, after she had begun transitioning and had already changed her name.

Happily married to a woman, she said she thinks the clinic was operating based on negative stereotypes about the sexual activities of transgender people.

"It's unfair, they're putting that on to their decision that perhaps disqualifies me from being able to donate blood," she said.

"People can't imagine that a transgender person is someone who's married, who's happily married, who has a family of support...and has a lot of friends who are behind them 100 per cent."

Morgane Oger with the Transgender Alliance of B.C. says Sessoms' deferral is an unfortunate consequence of preconceived notions.

"The Canadian blood supply is a very, very important resource and it needs to be guarded very carefully," she said.

"In this case, because Clayre is a transgender person, which is an identity, she's being put into a population group that has negative behaviour, rather than being asked about her behaviour and her activities.

"What they are saying is, 'Because you are a transgender person, you personally are a special case, you need to be filtered on an individual level, because you're presumed to be dangerous."

Although the film was based on the true story of HIV-positive cowboy Ron Woodroof, the character of Rayon is fictional and, Oger says, offensive to the transgender community.

"Lots of transgender people are married professionals and they don't take drugs and don't do any high-risk behaviour," she said.

Oger says the solution is for Canadian Blood Services to come up with a policy and clarify it.

"There's nothing better than explaining yourself and saying you're sorry and being clear and transparent," she said.

]Robyn Durling with the B.C. Human Rights Coalition says under the human rights code in B.C., anyone providing a common public service must do so without discrimination based on personal characteristics such as gender.

"You look at whether there was a personal characteristic and if the person was treated adversely, and if you can tie those things together then you have a prima facie case," he said.

Durling says once that initial case is made, the next step is determine if there is a defence for the discrimination.

"In this case, it would be something along the lines of public safety or public health. That would be up to the courts to decide whether or not the discrimination should then be allowed."

Meanwhile, Sessoms said she wants to continue to support and donate to Canadian Blood Services​, because the blood they collect could save someone's life.

But she would love to see an inclusive policy at the organization, whilst respecting the medical criteria they have to follow.

"Excluding someone because you don't know how to approach or interact with someone who is transgender is not a policy," she said.

"I'm more than willing to not only just give blood, but to talk to them and to try to figure out a way that we can actually make some change so this does not happen again."

With files from Kirk Williams