It's the latest move in B.C.'s resistance to the Trans Mountain pipeline expansion project.

B.C. is asking its highest court to decide if the government has the right to bring in stricter rules for companies looking to ferry more heavy oil — like diluted bitumen — through the province.

That would include crude flowing by way of an expanded pipeline, such as Kinder Morgan's expanded project.

As part of its reference case filed Thursday morning, the province put draft legislation before the court that would amend the Environmental Protection Act with the new regulations.

The province is essentially asking the B.C. Court of Appeal if it has the jurisdiction to bring that draft into reality.

"In other words, can we do it?" Attorney General David Eby said Thursday.

It's the latest move in B.C.'s resistance to the Trans Mountain pipeline expansion project.

Under the draft, companies hoping to bring more diluted bitumen through B.C. would need a permit from the province.

Companies could also be required to show a spill-response plan in advance.

An independent director would grant the permits, making the decision based on the best scientific research available. The director would also consult with Indigenous groups and the broader public before making a choice.

The new legislation would only apply to the movement of heavy oils, which the province considers to be the highest risk in the event of a spill.

The proposed legislation would not affect current shipments of diluted bitumen through B.C. It would only apply to companies seeking to expand shipments.

There is no estimate on how long it will take the court to hear the reference case. In Canadian law, governments submit reference questions to the courts to ask for advisory opinion on major legal issues.

Kinder Morgan issued a statement in response to B.C.'s announcement, saying the company is "clear and steadfast" in its goals: clarifying its ability to build in B.C. and protecting its stakeholders.

An emailed statement said the proposed legislation signals the province's "continued intention to frustrate the project."

Premier John Horgan has long said B.C.'s coastline and jobs could be at risk if the pipeline expansion goes through, tripling the capacity of an existing pipeline between Edmonton and Burnaby, B.C. 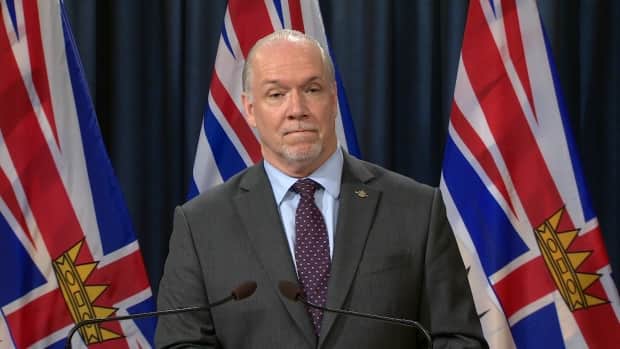 Horgan: "I don't work for Kinder Morgan. I work for the people of British Columbia."

"We know that British Columbians have a deep, personal connection with our coast, with our fish, with our wildlife," Horgan said Thursday.

"It's our responsibility to defend the interests of British Columbians."

Asked what he'd have to say directly to Kinder Morgan, Horgan said: "I don't work for Kinder Morgan. I work for the people of British Columbia … we have set ourselves on a course — and I'm going to continue to do that."

Alberta is in favour of the project, as is the federal government. The provinces have been sparring over the pipeline for weeks, in a battle that has sparked trade wars and a national summit with Prime Minister Justin Trudeau.

"If bitumen were so hazardous, why would we only be looking at the incremental bitumen that's in the new pipeline?" she said Thursday.

"This isn't about environment, this is about the new pipeline."

Notley, a lawyer, said she doesn't believe B.C. has jurisdiction "to do what they are proposing to do."

Saskatchewan Premier Scott Moe also reacted to the draft legislation, saying the B.C. government is using "whatever tactics they can to slow or stall or stop the investment into the Trans Mountain pipeline."

"With the inaction we see from the federal government in asserting their jurisdiction in this area, the government of British Columbia is having their way if you will," he said.

Ahead of the announcement, federal Environment Minister Catherine McKenna reiterated Ottawa's intention to get the pipeline built.

In a statement addressed to B.C. Environment Minister George Heyman, she outlined environmental measures she says the federal government has already taken to mitigate the damage in the event of a spill, including increased capacity to tow ships and five new emergency response stations.

McKenna also floated the idea of a joint Ottawa-B.C. panel of scientists to enhance existing research on oil spills to address the province's concerns.

The panel would make use of the science available on oil spills, including current examples of how to respond, should a number of different petroleum products spill.

The company set May 31 as the deadline for the B.C., Alberta and federal governments to find a solution to the impasse. Trudeau has repeatedly vowed that the project will go ahead.

With files from Megan Thomas and The Canadian Press