The B.C. government has given the green light to the Trans Mountain pipeline expansion project, after reaching an "unprecedented" agreement with Kinder Morgan for up to $1 billion in investment over 20 years.

The B.C. government has given the green light to the Trans Mountain pipeline expansion project, after reaching an "unprecedented" agreement with Kinder Morgan for up to $1 billion in investment over 20 years.

"We always said that the five conditions were a path to yes," said Premier Christy Clark in a Wednesday news conference, referring to B.C.'s stated terms for pipeline approval.

"That's where we are today."

Environment Minister Mary Polak and Natural Gas Development Minister Rich Coleman issued the environmental assessment approval for the interprovincial twinning of the pipeline between Edmonton and Burnaby, B.C., after what Clark described as years of "long and intense" negotiations to get "as much for B.C. as we possibly can."

In a joint statement, Polak and Coleman said, "We have always been clear economic development will not come at the expense of the environment.

"We believe environmental protection and economic development can occur together, and the conditions attached to the EA certificate reflect that."

Clark repeatedly said that B.C.'s role was to extract value and protection for the province through negotiations, based around the five conditions the government issued in 2012 for approving any pipelines.

"This wasn't a project that was ours to approve. It was the federal government's.... Our job was to fight for the best interest of British Columbians," said Clark.

"Had the five conditions not been there, [it] might mean that this project might not have been approved without additional coastal protections."

The conditions are meant to address concerns that have been raised by Aboriginal groups during consultation undertaken for the project, including impacts on vegetation and wildlife, parks and protected areas, greenhouse gas emissions and terrestrial and marine spills.

Kinder Morgan has also agreed to pay B.C. between $25 and $50 million per year for 20 years, to go into a fund for environmental protection, according to the province.

"Much of that fund will be devoted to work that community groups are taking on," Clark said. "Community groups will apply for the money, and if it fits the criteria, that money will be dispersed to them."

The deal also "has British Columbians first in line for jobs" on the pipeline, the government said in a news release.

The federal government granted approval in November, saying the project was in the national interest. The $6.8-billion expansion would triple Kinder Morgan's oil capacity to 890,000 barrels a day, in the 987-kilometre pipeline. 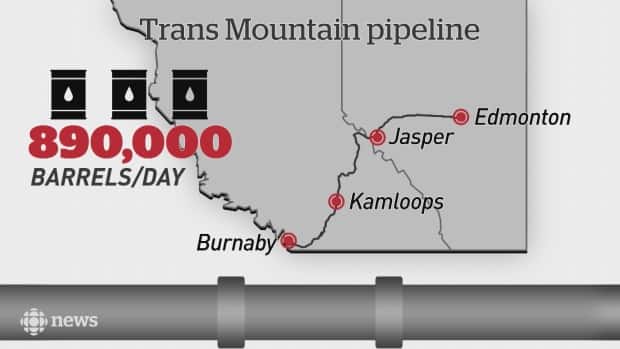 Trans Mountain Pipeline: what you need to know

Shortly after the decision was announced, Alberta Premier Rachel Notley expressed her approval.

"I'm very happy. It's good news for Alberta," she said.

"I'd like to welcome this news from our neighbours in British Columbia, and I thank Prime Minister Trudeau and the federal government for the work they have done to make sure this project is safe and that the conditions British Columbia set out were met."

The pipeline faces strong local opposition, including from Burnaby Mayor Derek Corrigan, who said the project would bring seven times the number of oil tankers into Burrard Inlet, off Vancouver's coast.

"I am surprised they have made this decision without negotiating any resolve on the conditions," said Corrigan. "I guess [Clark] has just conceded to the federal government on the issue and put up conditions to look like she has gained something."

A provincial election is scheduled for May 9, and NDP opposition leader John Horgan made clear his party would make its criticism a central point of its campaign.

"Some risks are too great. Some messes you just can't clean up," said Horgan, holding up a glass of bitumen he said was given to him by someone who lives in Hope, B.C., one of the communities the pipeline passes through.

"I will do everything I can between now and election day to work with every British Columbian who wants to make sure that this does not find its way into our marine environment."

Construction is scheduled to begin in September, with an expected completion date of late 2019.