From the polls closing to Guichon's announcement, a look back at how we got here.

It took 1,224 hours between the polls closing in British Columbia's 41st general election on May 9, and the moment it was finally resolved by Lt.-Gov. Judith Guichon, with the announcement NDP Leader John Horgan would become premier with the opportunity to test the confidence of the legislature.

The announcement begins a new chapter in British Columbia's political history but puts an end to an inter-election period that turned thousands of people into armchair political scientists.

We've put together this timeline to properly document all the twists and turns over the past seven weeks and three days.

Stage 1: Waiting for the final count

Day 1:  Election night sees both the NDP and Liberals lead in 44 or more seats at different points — which would give them a majority — but the night ends with the Liberals at 43 seats, the NDP at 41 seats, and the Green Party at 3 seats. However, there are approximately 179,000 absentee ballots still to be counted.

The leaders of all three parties give optimistic speeches, and observers focus on the riding of Courtenay-Comox, where the initial count gives NDP candidate Ronna-Rae Leonard a mere nine-vote lead over Liberal candidate Jim Benninger.

Day 2: Christy Clark announces Lt.-Gov. Judith Guichon has asked her to stay on as premier until the final count of ballots by Elections BC, which isn't expected for another two weeks. Focus begins to turn to who the Green Party might support, if the final vote count stays the same — and whether the NDP and Liberals might be able to poach an MLA from the other party.

Day 9: The Green Party announces its negotiating team for deciding which party to support in the legislature should it remain a minority situation. The team includes Norman Spector, Prime Minister Brian Mulroney's former chief of staff.

Day 14: Elections BC begins counting the approximately 179,000 absentee ballots from across the province.

Day 16: The count ends with no seats switching and no automatic recounts needed, with the NDP winning Courtenay-Comox by 189 votes. Provincewide, Liberals won, by 1,566 ballots — winning more of the popular vote count than the NDP with 796,672 votes to 795,106 — the closest result in British Columbia's history.

Following the count, Horgan says that the NDP and Greens are working on a governing framework, "but we don't have that today."

Day 17: With the final count done, the Greens begin negotiations in earnest with both the NDP and the Liberals. While Horgan attends the talks for the NDP, Clark does not do the same for the Liberals.

Day 20: Horgan and Weaver attend a rugby match together but say it was purely coincidence they were both at the event. Hours later, the last negotiation session between the Greens and the Liberals takes place.

Day 21: Horgan and Weaver announce their parties have reached a supply and confidence agreement, giving the NDP the 44 MLAs needed to gain the confidence of the house. 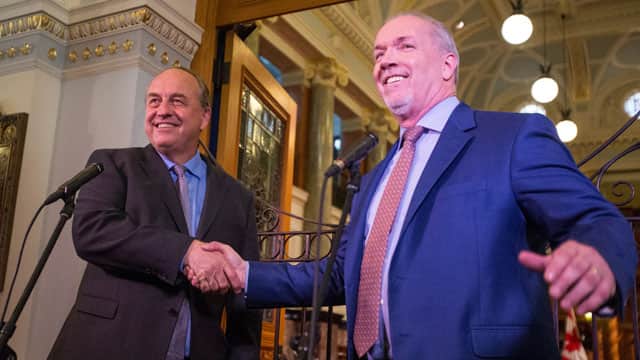 3 years ago
2:10
After cancelling a meeting with B.C.'s Liberals, the provincial Green Party threw its support behind the NDP in an effort to end Christy Clark's time as premier 2:10

Day 22: With Horgan and Weaver having already announced a 2 p.m. news conference on the details of their agreement, Clark, at noon, tells the media she'll be making her own announcement at 1:30 p.m, when she tells reporters she will stay on as premier and wants to try and seek the confidence of the house — though she expects to lose a confidence vote.

She says she hopes to begin a new session of Parliament in early June, though it ends up being later in the month.

A half-hour later, the Greens and NDP unveil the details of their agreement.

Day 23: Horgan and Weaver go to Government House to deliver signatures from the 44 Green and NDP MLAs who have agreed to work together to defeat the Liberal government, in order to show Horgan he could command the confidence of the house and become premier if asked by Guichon.

Day 24: Horgan writes a letter to the CEO of BC Hydro, asking the CEO not sign any new contracts on the divisive Site C hydroelectric dam project. It begins a series of letters between Horgan and Clark about the $9 billion hydroelectric dam that is currently under construction.

Day 31: The legislature is recalled for June 22 and the swearing-in of the 87 MLAs begins.

Day 35: Clark's new cabinet is sworn in, with veteran cabinet ministers replacing high-profile ministers who were defeated or retired, with a few rookie MLAs and backbenchers elevated.

Day 36: Laura Miller, the B.C. Liberal campaign manager in May's election, announces she is leaving her position as the party's executive director.

Day 37: A series of duelling news conferences, spread out over several days, commences between the Liberals and the NDP/Green partnership, focused mainly on the issue of who will sit as Speaker.

Day 42: In advance of the throne speech, Clark and members of her party begin announcing new initiatives that weren't in her party's platform, including increasing welfare rates by $100 a month and funding more charging stations for electric vehicles.

Stage 4: Back at the legislature

Day 45: The first session of B.C.'s 41st parliamentary session begins with Liberal MLA Steve Thomson becoming Speaker, the only person to run for the position. A throne speech is delivered by Guichon, who mentions 30 new commitments by the Liberals that weren't in their election platform.

Both the NDP and Greens say the new promises, many of which were in their platforms, will not change their decision to vote against the throne speech.

Day 49: As the legislature meets for its first and only full week, the Liberals bring forward two motions: one to ban union and corporate donations, and one to give the Greens official party status.

Both are immediately defeated by the NDP and Greens in a 44-42 vote, denying them even first reading — something no observer can recall seeing in the B.C. Legislature.

Day 50: With the Liberals in the midst of sending successive MLAs up to debate the throne speech, De Jong asks the newly-elected Speaker to provide "guidance" as to how a Speaker might conduct themselves if faced with a series of 43-43 ties, as appears likely if the NDP were to form government.

Two days later, the Speaker mostly avoids making any definitive statements on the issue due to the politicized environment but points out historical norms in B.C.

Day 51: In the morning, De Jong announces that the government had a $1.3 billion higher surplus than anticipated in the last fiscal year, allowing the Liberals to make new spending promises in the throne speech.

In the afternoon, Horgan formally introduces his non-confidence motion in the house.

Day 52: Horgan's non-confidence motion is voted on, and passes 44-42. Christy Clark heads to Government House to inform Guichon of the result, and during their 90-minute meeting, Clark ultimately requests dissolution of the House and new election.

John Horgan has been invited to form a government, and will be 36th premier of British Columbia.