The B.C. Federation of Labour wants police to investigate the owner of a Tim Hortons in Fernie, B.C., after two former workers accused him of cheating them out of overtime pay. 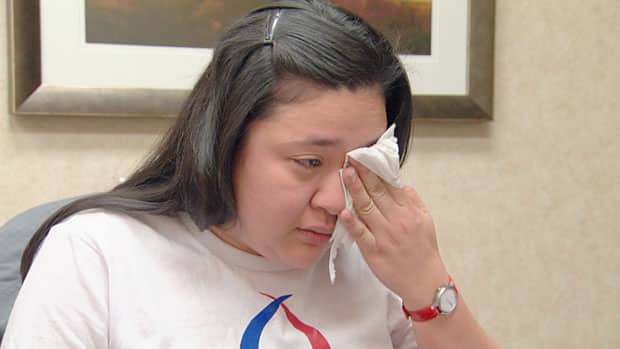 The B.C. Federation of Labour wants police to investigate the owner of a Tim Hortons in Fernie, B.C., after two former workers accused him of cheating them out of overtime pay.

Heide Kibanoff and her boyfriend, Richard Pepito, say Pierre Pelletier hired them and other Filipinos under Canada's Temporary Foreign Worker Program to work at the Tim Hortons in the small town, where they often put in long hours.

The pair allege that Pelletier often made sure that the overtime that was paid came back to him — in cash — even driving employees to the bank and waiting while they cashed their paycheques.

CBC News has interviewed nearly half a dozen employees with a similar story at the Tim Hortons in Fernie, but cannot identify them, because they fear losing their jobs and being sent back to the Philippines.

Jim Sinclair, president of the B.C. Federation of Labour, is now calling on the RCMP to investigate the case.

"This could clearly be a case, from what we've been told from those workers, of wage theft," said Sinclair.

"And we've asked the RCMP to investigate before and they have. And we'll be approaching the RCMP in this case to investigate, and if they find a case of theft, order the company to pay or charge them."

Sinclair believes the entire Temporary Foreign Worker Program is un-policed by the federal government or province.

"We as Canadians are letting this happen. They're coming to Canada under our program and if employers are abusing them, the least we can do is say you can stay, you can work here.

Documents obtained by CBC News show an internal investigation into Pelletier is already underway at the head office of Tim Hortons.

Pelletier ​is also accused of charging employees the processing fees for renewing their temporary work permits. According to regulations, the employer is responsible for paying those fees.

Pelletier has not returned CBC's calls for an interview. However, Fernie Mayor Mary Giuliano said Pelletier is well known in the community.

"Whenever there's any events and he's asked, they're the first ones to deliver food to all of the events, so the community knows them as very generous, giving people," Giuliano told CBC News.

Kibanoff left her job at Tim Hortons in June, but said she's still haunted by the painful memories. Pepito also quit and filed a complaint with the B.C. Employment Standards Branch.

A hearing date has been set for February. The couple are also preparing to file a complaint with the B.C. Human Rights Tribunal.