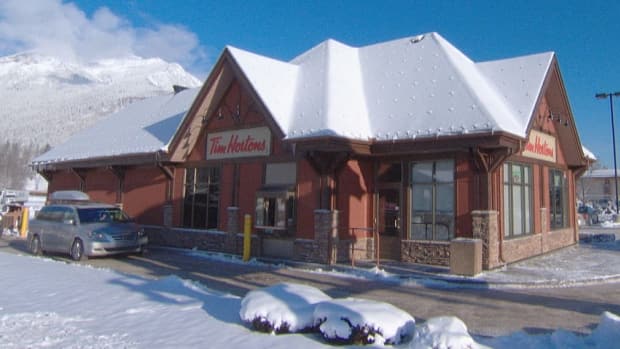 The popular doughnut chain made the announcement hours before Employment Minister Jason Kenny announced an immediate moratorium on the fast-food industry's access to the Temporary Foreign Worker Program.

The six Tim Hortons workers who originally raised concerns over their working conditions are all Filipino and all were hired to work at the Fernie franchise. They first spoke out in December of last year, with claims of alleged theft, threatening behaviour and manipulation on the part of their boss, Pierre Pelletier.

Workers alleged Pelletier made sure the overtime pay they received came back to him — in cash — and that he even drove employees to the bank and waited while they cashed their pay cheques.

When CBC reached Pelletier by phone on Thursday, he refused to comment on the takeover by Tim Hortons or the claims made by his former employees, saying simply "No comment."​

"We have terminated our relationship with the Blairmore, Alta./Fernie, B.C., franchisee for failing to comply with employment standards requirements, a matter Tim Hortons takes very seriously," Petrycki wrote.

In the second of two statements issued Thursday, Tim Hortons confirmed it is expanding its auditing system to include mandatory independent audits for every franchisee who accesses the federal Temporary Foreign Worker Program.

"We encourage the government to make independent audits mandatory for every company that uses this crucial program to reassure Canadians of the integrity of the program," said the statement.

In an earlier statement early Thursday, Scott Bonikowsy, vice-president of corporate affairs at Tim Hortons, said the program is necessary in some communities where there are not enough Canadians to fill positions in the company's restaurants.

"Tim Hortons has a strong track record in responsibly using this program. In a few isolated incidents where that has not been the case, we have acted to remove those franchisees from our system," said the statement.

"We will not tolerate abuse of employment standards for Canadian or temporary foreign workers, and we will continue to work hard to create a positive, fair work environment for all of our team members."

According to Tim Hortons, the company employs around 4,500 temporary foreign workers, about five per cent of its workforce.

On Thursday, Pepito told CBC News he feels bad about Pelletier losing two franchises, but believes everyone who came forward may finally get justice.

"What happened is we’ve been mistreated and exploited, so in a way we are glad justice is almost coming," said Pepito.

None of the six people who came forward work at the Tim Hortons' Fernie franchise any more. One is at Boston Pizza, another at Subway in Saskatchewan, two more are headed to Alberta for other jobs and two are at McDonald's in Fernie.

'So scared, I was crying'

Kibanoff said she did as Pelletier instructed, while working at his Fernie restaurant, because she had applied to the Provincial Nominee Program — a fast track to permanent residency in Canada.

"All was I thinking was that I don't wanna go home, and he said it's to protect us and he's doing us a favour," she said.

The workers allege they had to pay hundreds of dollars each for their work permits and Labour Market Opinion surveys, when employers are legally obliged to cover those costs.

A Labour Market Opinion — also known as a LMO — is a legal document describing the worker's job and is required by the federal government before it issues a temporary permit for a foreign worker.

Orense and Natividad claimed their boss changed their status to skilled supervisor on their LMOs, to help Orense become a permanent resident and allow Natividad to bring his wife to Canada.

But Orense said Pelletier threatened to send her home when she disagreed with him over other matters.

"I was shocked...I was so scared, I was crying," Orense said.

"Nobody ever treated me that way. And especially, since I'm not in my own country, of course I feel afraid that all of a sudden I will be sent home," she told CBC News.

Pineda said she had asked her boss for help with paperwork for the Provincial Nominee Program after Pepito came forward, but claims Pelletier said he would only help if she convinced Pepito to drop his complaint with the B.C. Employment Standards Branch.

"I was really worried. I thought he was a good guy, that he was trying to help me," she said. "I'd been waiting for six months for a work permit and my family just got here. I didn't want to take any risks because I didn't want my family to go home again."

When the claims emerged in December 2013, Pelletier defended himself and his wife, Kristine, in an open letter printed in the Fernie Free Press.

"We would like to express how extremely saddened and shocked we are at this recent turn of events and want to set the record straight with our local community," wrote Pelletier.

The workers' allegations prompted the RCMP to open a file related to the Tim Hortons in Fernie. On Thursday, police said their investigation is ongoing, but no charges have been laid.

The B.C. Employment Standards Branch is also investigating, as is the B.C. Human Rights Tribunal.

None of the allegations made by the workers have been proven in court.

On mobile? Click here to read both of Tim Hortons' statements