Thousands walk for reconciliation in Vancouver

Thousands of people braved a pouring rain in Vancouver Sunday to take part in a reconciliation walk marking the sad history of residential schools in Canada, erupting in a raucous cheer as the daughter of American civil rights hero Martin Luther King Jr. urged all Canadians to move forward and heal. 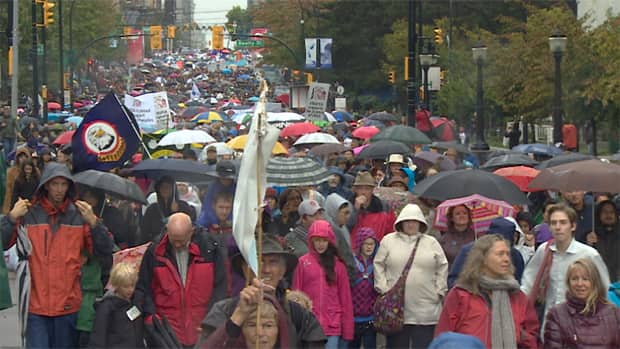 Survivors touched by outpouring of support

Thousands of people braved a pouring rain in Vancouver Sunday to take part in a reconciliation walk marking the sad history of residential schools in Canada, erupting in a raucous cheer as the daughter of American civil rights hero Martin Luther King Jr. urged all Canadians to move forward and heal.

Dr. Bernice King told the crowd not to give up on the process of progress.

"My father said something very powerful about progress. He said, human progress is neither automatic, nor inevitable," she said from a stage set up at the start of the march, which drew a huge crowd that some estimates put more than 10,000.

"Even a superficial look at history reveals that no social advance rolls in on the wheels of inevitability. Every step towards the goal of justice requires sacrifice, suffering and struggle."

There is no time for apathy or complacency, said King, who gathered with tens of thousands of people last month to mark the 50th anniversary of her father's iconic "I Have a Dream" speech at the March on Washington.

A Baptist minister herself, King inherited the gift of powerful oratory, and the crowd erupted in raucous cheers as she outlined her vision for a Canada that will "be the great nation that it's called to be."

"This is no time for apathy or complacency. This is a time for vigorous and positive action," King said.

"This requires leadership action on all fronts in Canada, from political and government, corporate, faith, educational and community leadership, because, as I said, we are all in this together. We are tied in an inescapable network of mutuality, caught in a single garment of destiny and what affects one person here in Canada — no matter their background — directly affects all indirectly."

The four-kilometre walk through downtown Vancouver came at the end of a week of hearings by the federal Truth and Reconciliation Commission, a fact-finding commission set up as part of the settlement between the Canadian government, victims and various churches who operated residential schools — the last of which closed its doors in 1996.

The gathering in Vancouver is the sixth of seven gatherings across the country, and will culminate in a final event in Edmonton next year, and a final report by the commission.

The walk — the first reconciliation walk in Canada — and several other events were organized by Reconciliation Canada, an independent collaboration between the Indian Residential School Survivors Society and Tides Canada Initiatives Society to engage all Canadians in the reconciliation process.

The group organized the lighting of a fire of reconciliation to start the week of hearings by the commission, and held a canoe gathering of all nations last week at Vancouver's False Creek.

King said economic empowerment is part of the way forward.

"For the way moving forward, you must be determined to hang in there," she said.

"There's no single solution. It's going to be multifaceted, because we are talking about healing on many different levels and empowerment in many different ways. But one thing I can say, this is no day to pay lip service to the process. It's incumbent on everyone to pay life service. Canada cannot afford the luxury of slowing down, or cooling off."