Thieves can be seen on newly released surveillance video ramming a stolen SUV into a B.C. shopping mall, then smashing through the front of two jewelry stores before looting the shops and escaping in the same vehicle. 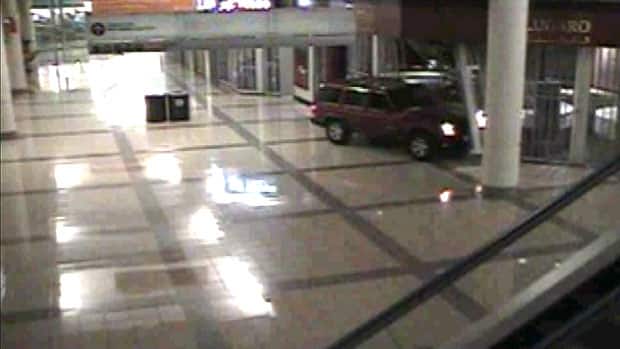 Thieves using a stolen SUV rammed through the doors of a Burnaby, B.C., shopping mall then smashed the car through the front of two jewelry stores before looting the shops and escaping in the same vehicle, surveillance video released Tuesday shows.

RCMP said the incident occurred in early morning hours of Friday at the Metrotown mall.

There were no apparent injuries, but a cleaner can be seen mopping the floor and then suddenly scrambling for safety as the SUV crashes through the doors into the mall.

Four men wearing disguises were seen running out of the vehicle, at which point the released video ends.

The men then scooped up the contents of the jewelry display cases, police said.

Police said the break and enter was similar to others which have occurred at various malls throughout the Lower Mainland, but provided no details of the other incidents.

"This brazen crime trend is concerning to us, and thankfully no innocent citizens have been injured," RCMP Supt. Derren Lench said in a release. "It's obvious we are dealing with a determined and professional group."

Police are appealing to the public for any information that might help their investigation.