The empty buildings of Kitsault, B.C. have intrigued people for decades. Now, the story of the people who lived in them will be told in a musical.

Kitsault, B.C. was built, settled and abandoned in 3 years — and stands to this day

"September 1982, in the mountains of Northern B.C., there's a town that was built for me.

(Opening to Kitsault: The Musical)

When Carl Pucl saw a short TV clip about a community in northwest British Columbia that was centrally planned, built and deserted in the space of three years — and preserved ever since — he was immediately intrigued.

"They really didn't show anything about the people who lived there. Just the abandoned buildings," he said.

The abandoned buildings of Kitsault have been the subject of dozens of stories throughout the years. People have looked at the empty community, surrounded by mines, mountains and a deep-water port, and seen tourism and economic opportunities.

Pucl, however, saw a musical.

"When you're growing up on the other side of the country, you really don't have an idea of what a mining town in B.C. looks like," he said.

"Kitsault represents an amazing Canadian story that has not been told yet."

For two years, Pucl and his co-creator Doug Price have been writing songs, conceiving scenes and criss-crossing the country.

Now, they hope to workshop the story of Canada's last ghost town within a year.

"When we started, we didn't have any kind of clear vision of what the story was. But we kept looking at these pictures of abandoned buildings, and we kept wondering, 'What happened here?'" said Pucl.

'The company just built a town ... for everyone'

John Sanders had worked in Port Hardy for Amax Canada for many years when, in 1979, the mining company offered him an intriguing promotion.

The pitch? With the price of molybdenum booming, they asked Sanders to manage a large mine they were going to reopen, and oversee all hiring and production.

The catch? There were no roads, no homes — and the nearest major community, Prince Rupert, was a four hour drive away.

"Kitsault might have been one of the last live-in towns, and it was fly-in, fly-out to start out with," said Sanders, who was intrigued by the untraditional opportunity.

"That's not the easiest sell to sharp tradesmen, accountants, engineers who wanted to work there. So we thought, 'How do you keep people there?'" The solution, he said, was to build a $43 million community, complete with everything a modern 1980s suburban society would want.

"The company really just built a town. Like, for everyone," said Brad Halkier, who was hired straight out of medical school to be one of two doctors in Kitsault.

"They didn't just build a medical clinic, but they built schools, and apartment buildings, and a rec centre, a curling rink and swimming pool and shopping mall. This was going to be a 25, 30, 40 year project."

As mine manager in a company town, Sanders was nominally the mayor. But he said the governing of Kitsault was generally communal in nature.

"The company ran the physical plant, the roads and everything, but the town as a social organisation had sort of mayors of the moment. Whatever activity was being developed, or which one was focused on right now, the club leader or interested person would essentially be the mayor."

With everyone in Kitsault moving there at virtually the same time, for the same reason, and expecting to stay for a long time, the end result was neither Lord of the Flies style anarchy or small town intrigue, but instead a sense of shared purpose, said those who lived there.

"Conflict just didn't happen," said Halkier, who on various days doubled as the town's ambulance driver, veterinarian, or in the rare case, priest.

"You'd think okay, small town, there's going to be problems with drinking or violence — we didn't even have police there, for goodness sake! There were incidents, but they were very, very rare," said Sanders.

"People, they did their thing, and it seemed, without having a great long list of municipal rules and regulations, people just behaved."

But just as quickly as Kitsault was born, it died.

"It was a tough go, because the prices of molybdenum started to fall even during construction," said Sanders.

"The U.S. mines were under tremendous stress, and the cash flow of the company was at risk, but I hoped people had lost sight of the fact there was this little mine in B.C. chugging this stuff out."

Unfortunately for Kitsault, they hadn't. Rather than shutter one of their larger mines in America, Amax decided Kitsault would close immediately. Within a few months, the site was once again empty.

It was the last in a long line of British Columbia towns that was founded because of a natural resource, and abandoned for the same reason. Today, if a company wants to mine, drill or do fracking in a remote part of the province, they'll build a work camp, and fly in employees on short-term contracts.

"You don't see people building towns," said Sanders, with more than a tinge of melancholy in his voice.

"How much can you justify building a great big town with a finite life? Do the conservation ethics of society tell us, do you really want to do that? Pave all those roads, build all those houses, when you've got a finite life here?"

Still, he never regrets the Kitsault experiment. "It makes great economic sense to minimize the infrastructure costs. You're much better off flying people in and out," he said.

VIDEO: The newest owner of Kitsault, Krishnan Suthanthiran, bought the town last decade and has dreams of turning it into an LNG facility. 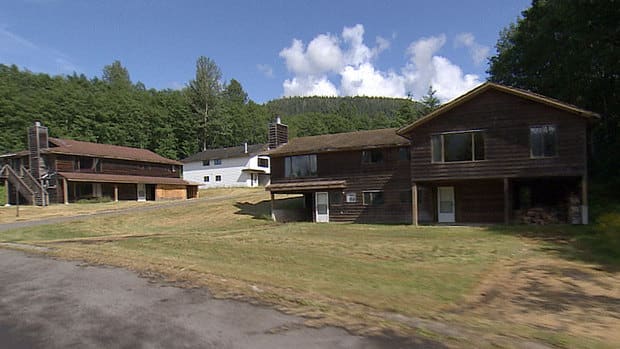 7 years agoVideo
11:12
Chris Brown takes a tour of B.C.’s perfectly preserved ghost town, but as he finds out, there are plans to bring it back to life. 11:12

'He could do a thesis on this'

When Pucl learned of Kitsault, he knew nothing about that unique experience, but knew capturing it was necessary if he was going to write a musical with emotional resonance.

"It was really important for us to get the story right. We didn't necessarily know who occupied these homes. We wanted to connect with as many people as possible," he said.

"When you're looking at the story, which is a true-life story, there's a responsibility we have as artists to tell the story in a true-life way. But when you're looking at people's stories, which story do you tell?" To do that, Pucl began a quest to talk to as many people who lived in Kitsault as possible — and collect mementos many had kept from their brief but memorable time there.

A yearbook from the school. A phone directory from BC Tel. Candid photos and intimate diaries. He secured the life rights to the stories of more than 60 people who made Kitsault home.

"He showed me the research work he'd done, and I was flabbergasted. Astonished," said Sanders, who was originally reluctant to talk to Pucl.

"He could do a thesis on this. I don't know that an insider would have ever done this research. 'Great memories, too bad it's over.' He said, 'No, there are lessons to learn beyond that. Why did it turn out that well? What were the factors?'"

The documents given to Pucl not only helped him track down nearly every person key to Kitsault's formation and gave him plenty of resources to develop the musical — they reopened memories and friendships for people who lived there.

"It's allowed me to revisit it in my own mind again. It's been great, and I've been grateful for that," said Halkier.

'Let us toast to all the toasts we've made'

The story of Kitsault ended with people leaving the town over the course of several weeks — but that's not exactly the best ending for a piece of drama.

"It is this Titanic story. You know exactly how it ends, so how do you tell it?" said Pucl.

Fortuitously, when talking with a person who was Sanders' secretary, he came across another artifact — a framed piece of paper saying, "We had the last drink in the Maple Leaf Pub," with the signatures of dozens of people who did just that.

"Many people have told us they didn't want to finish that last little bit of drink they had, because they knew once they did, once they took that sip, that Kitsault was over. That's a gift to an artist, of everyone cheering for the last time, and that's it," said Pucl.

That's how the musical ends: with people slowly leaving the pub one final time. But there's still a ways to go until Pucl and Price's musical actually begins, and few people would bet the farm on a Canadian ghost town musical.

Still, you could say the same about a hip-hop recounting of how a Caribbean orphan became one of America's founding fathers, or a dance-filled adaptation of a few T.S. Eliot poems about felines.

And even if Kitsault: The Musical befalls the same fate as Kitsault the town, those that remember their time in the most unique of Canadian communities are grateful for what they have done.

"I have no idea what the musical will be like, and honestly, it doesn't really matter to me," said Halkier.

"What matters to me is this happened."

PHOTO GALLERY: The ghost town of Kitsault, then and now