The B.C. Liberals claim future liquefied natural gas sales will help pay off the province's debt. The CBC News Reality Check team wades through the spin to figure out whether the plan is hype or hope. 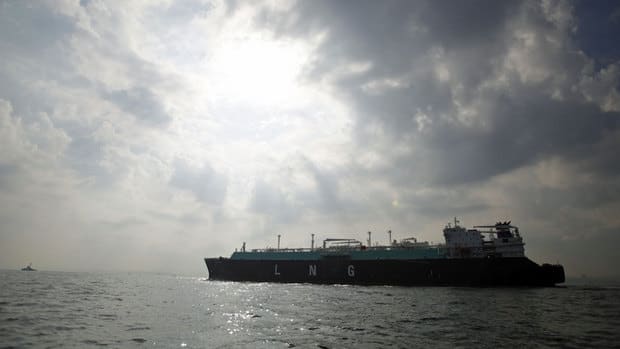 The B.C. Liberals claim future liquefied natural gas sales will help pay off the province’s debt. The CBC News Reality Check team wades through the spin to figure out whether the plan is hype or hope.

"We have a plan to export natural gas at five times the price of what we can get here in North America."

The site has been prepped on the first of five promised LNG plants in northern B.C. where the gas will be extracted, chilled into liquid form and shipped to Asia, where there’s a thirst for LNG after the 2011 earthquake in Japan, which sidelined all but two of the country’s 52 nuclear reactors.

While the Japanese government has indicated that several nuclear reactors could restart as early as this fall, Japan has offered up $10 billion in loan guarantees to fast-track B.C. LNG projects.

"Their hunger for the cleanest fossil fuel on the planet is almost unlimited," Clark said earlier this month while on a campaign stop in Dawson Creek.

But Peter Hughes, a UK energy consultant who specializes in the international trade of LNG, says Japan's willingness to pay sky-high prices is not unlimited.   He says the current system of pricing LNG based on the price of oil could soon change.

"The Japanese have now decided they need to move away from oil indexation as the pricing basis for their LNG imports and the government has issued instruction to that effect, which in Japan is a very powerful factor," he said.

If Asia succeeds at creating a more competitive commodity market, countries that can produce LNG cheaply will have a better shot at the lucrative contracts. Deciding the future price of LNG is right now a sticking point on B.C.'s ability to move forward.

But on the campaign trail — Clark sticks to her pitch.

"Development in natural gas can stimulate $1 trillion \in new economic activity across the province — 100,000 new jobs. $100 billion in 30 years," she said last week.

But Hughes says that plan is far from certain.

"It strikes me as a little bit of wishful thinking," he said. "B.C. has to compete for that market going forward and compete with a number of different potential sources of LNG and will have to so on the basis of its cost competitiveness."

He’s one of more than a dozen LNG analysts predicting a price correction in the uncertain future market.

In Australia, a $45-billion project was scrapped earlier this month because of escalating costs.

The NDP accuses Clark of trying to get elected on a dream.

"She's putting all her eggs in one basket and saying LNG is going to be the savior for everything," former NDP leader Carole James said earlier this month.

"They've been promising some sort of natural gas prosperity magic fund," he said.

"The suggestion is, from this Liberal government, is that prices are going to hold firm," he said. "I don’t think that is the case at all. I think there is a very good chance that natural gas prices will plummet in the future."

Still, Clark insists the first plant will be running in two years and two others will be shipping LNG by 2020, while insisting her projections are quite modest.

"In setting out the amount of money that we'd be putting into the Prosperity Fund, at $100 billion over 30 years, set a very conservative number. But we'll see."

Furthermore, Clark has yet to sign any actual deals with investors to build LNG plants in B.C., though talks with several interested companies are ongoing.

In the end, CBC’s Reality Check team finds for Clark to make these claims with no deals in place, it's more hype and hope than fact, and we are calling them political spin.