The political satire from Sony Pictures, which revolves around an assassination of North Korean leader Kim Jong-un, will be shown at Hollywood 3 cinemas in Pitt Meadows and Surrey, B.C. 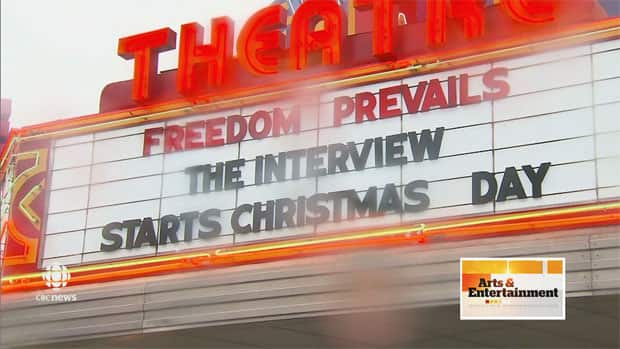 The Interview screens in Metro Vancouver

Vancouverites can now watch the controversial movie, The Interview, in theatre.

The Interview was scheduled for a release on Christmas Day, but Sony Pictures pulled it out of security concerns after hackers threatened the company as well as theatres planning to show the movie.

The political satire from Sony Pictures, which revolves around an assassination of North Korean leader Kim Jong-un, will now be shown at Hollywood 3 cinemas in Pitt Meadows and Surrey, B.C.

Parts of The Interview were filmed in CBC Vancouver's newsroom and it was written and directed by the Vancouver-born Seth Rogen and Evan Goldberg.

Now, despite the threats, 27 independent theatres across Canada are screening the film, including the Hollywood 3 Cinemas in Metro Vancouver.

"We actually had a contract for it before Sony pulled it," said Hollywood 3 cinemas owner Rahim Manji. "Obviously we were the first ones to jump back on it."

Manji said he also contacted police as a precaution and officers will be patrolling the area near the theatres, but he does not anticipate any problems.