British Columbia Premier Christy Clark has accused federal politicians of "tragically misdirected" policies over the issue of temporary foreign workers, as she pushes for the thousands of skilled labourers needed for her envisioned liquefied natural gas industry.

Christy Clark: 'There's going to be a spurt in the number of workers that are required.' 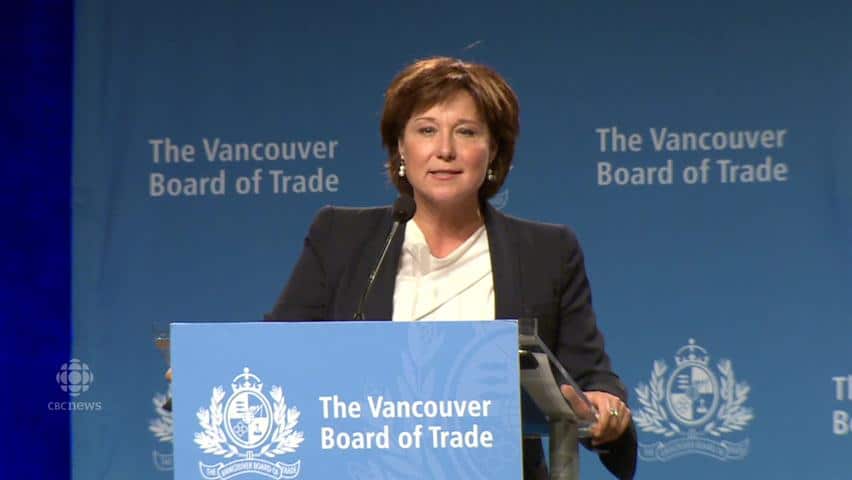 British Columbia Premier Christy Clark has accused federal politicians of "tragically misdirected" policies over the issue of temporary foreign workers, as she pushes for the thousands of skilled labourers needed for her envisioned liquefied natural gas industry.

Clark took a bold stand in a speech to the province's business community Thursday, just ahead of her government's return to the legislature and planned introduction of new LNG laws.

She told the Vancouver Board of Trade luncheon that as federal election campaigning unfolds, leaders in Ottawa must stop playing politics over the controversial program.

"We should not think about people who come from across the world to British Columbia to work as being something less than the rest of us," she said, after laying out her Liberal government's priorities.

Call them "potential new Canadians," because they're coming here to help us build our country.- B.C. Premier Christy Clark, on temporary foreign workers

"So my advice to federal politicians is this: If you want to fix the temporary foreign workers program, maybe they should start with changing the name.

"Call them 'potential new Canadians,' because they're coming here to help us build our country."

The premier added her voice to other western leaders critical of the federal government's program overhaul, arguing new rules are too onerous for provinces facing genuine labour shortages.

In June, Federal Employment Minister Jason Kenney laid out plans to limit how many foreign workers can be hired by large- and medium-sized companies. Kenney also included tougher penalties for companies found in violation of the rules and ordered inspections to deter abuses.

Alberta Premier Jim Prentice said last week that labour policy will top his agenda when he gets his first meeting with Prime Minister Stephen Harper.

The B.C. Liberals also want to mitigate an expected dearth of labour, which will only grow larger if their LNG plans are successful.

Clark said her government is attempting to re-engineer secondary and post-secondary programs to ensure young people are properly trained for skills-intensive work. But even wooing workers from other provinces will not be enough to meet the demand, she warned the gathering. The only option will be to look overseas, she said.

According to the federal immigration department, the temporary foreign workers program is meant to help employers fill "short-term gaps" in the labour market.

"Most temporary foreign workers are limited to working in Canada for four years before having to return to their home country," states the Citizenship and Immigration Canada website.

It says such workers would have the opportunity to apply for permanent residence using other programs, like the provincial nominee program.

It's not clear how Clark's comments square with the temporary nature of the program.

She told reporters after her speech she couldn't give figures on what proportion of the economy will need to rely on temporary workers.

"The fact is that as we're building (LNG), there's going to be a spurt in the number of workers that are required. Those jobs will be temporary in nature," she said.

Asked for specifics about the discrepancy, Clark's office failed to provide a direct response.

A B.C.-based immigration lawyer said he's impressed with the premier's passion and hopes she follows through on finding a labour solution.

Richard Kurland said B.C. already has one of the best provincial nominee programs in Canada, but trails behind when it comes to selecting economic immigrants.

"There is a genuine need for temporary foreign workers," he said, while noting that taking a stand could come at a political cost.