A jury has found Matthew Foerster guilty of murder in the first degree in the case of Armstrong teen Taylor Van Diest, who died after being attacked on Halloween in 2011. 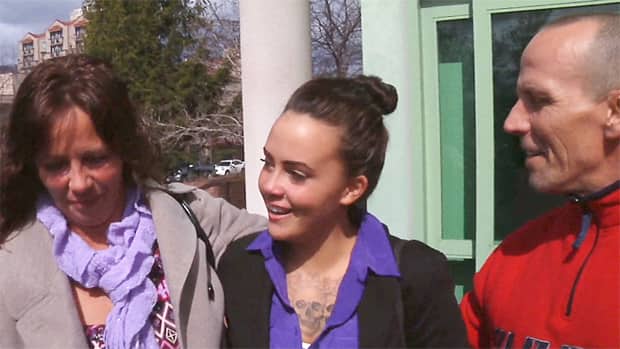 7 years ago
2:13
A Kelowna jury has found Matthew Foerster guilty of the first-degree murder of Taylor Van Diest 2:13

A jury in Kelowna, B.C., has found Matthew Foerster guilty of first-degree murder in the death of Armstrong teen Taylor Van Diest.

Foerster, originally based in Cherryville and now 28, admitted responsibility for causing the injuries that killed Van Diest, but pleaded not guilty to the charge of first-degree murder.

​The 18-year-old girl was found beaten with fatal head wounds by the side of railroad tracks, hours after going missing on Halloween night in 2011.

Police, family and friends rushed to her side before an ambulance took her away. She died later in hospital, where a nurse clipped her fingernails to send for DNA analysis.

Van Diest had left home at around 6 p.m. to meet a friend. She had been walking along the tracks, dressed like a zombie for Halloween, and was texting back and forth with her friend. In the last text her friend received, Van Diest wrote about "being creeped," or followed.

Police later identified Matthew Foerster as a suspect, arrested him in Ontario, and recorded an hours-long interrogation that was played back for the jury this week.

In the video, Foerster is sobbing as officers tell him how his family members are worried about him, and how he needs to take responsibility for what he did to repair his relationship with his family.

After about two hours, one officer gets Foerster talking. Foerster said he was drinking and smoking marijuana on Halloween of 2011. When the officer asks him "Do you feel bad for killing Taylor?," Foerster says "yes."

On Thursday in Kelowna, both Crown and defence gave their closing submissions to the jury.

The Crown argued Foerster followed Van Diest to a secluded area of Armstrong intending to rape her. When Van Diest fought back and screamed, Foerster smashed in her head with a heavy flashlight.

Foerster's defence lawyer said her client only wanted consensual sex with Van Diest. But when a scuffle ensued, Foerster pushed the Armstrong teen, causing her to hit her head on a steel pipe on the ground.

"It think it sounds a little too far fetched and unrealistic for anyone to believe that it could actually happen that way. It was what it was, and I think [the lawyer] would be hard pressed to sway that jury otherwise."

She told CBC News she was confident her family would get justice.

Earlier in the trial, the judge instructed the jury that a killing committed during a sexual assault or attempted sexual assault is considered first-degree murder.

In Canada, a conviction of first-degree murder carries an automatic life sentence with no chance of parole for 25 years.

Lisa Jean Helps, Foerster's defence lawyer, would not say Saturday whether her client would be considering an appeal, and only said that it was an emotional time.

"It has been a difficult trial for everyone involved," said Helps.  "The defence teams extends our thanks and gratitude to everyone involved from the criminal court process, including the Kelowna sheriffs, the court services officers, of course the jurors and the judge, and especially Crown counsel."

"Everyone has acted with professionalism and care and we are very grateful."

With files from the CBC's Brady Strachan and Stephanie Mercier