The executive chef at the high-end Vancouver sushi restaurant Miku demonstrates how to make sushi while delving into the history and culture of sushi in North America. 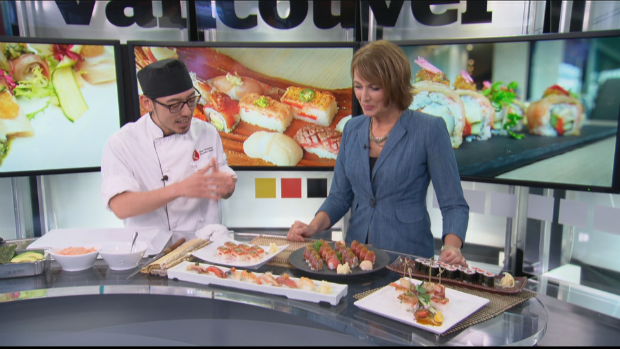 Vancouver-based chef Kazuhiro Hayashi has embraced the popularity of sushi outside of Japan and blends traditional recipes with newer, experimental variations.

Sushi may feel like standard fare to many people in B.C., but Hayashi said North Americans once needed a bit of coaxing. Classic sushi rolls like hosomaki, with seaweed wrapped around the outside, turned many diners off.

"Inside out" rolls were developed to hide the seaweed from sight, leading to popular varieties like California rolls and dynamite rolls, Hayashi said.

Those inhibitions, however, have now disappeared, he said — and love for the dish is so fervent that on social media people have declared June 18 to be "International Sushi Day."

"We can be more creative in North America," Hayashi said.

"I think people here are more adventurous, and are looking for something more unique. Japan is more traditional.

In the video above, Hayashi shows Our Vancouver host Gloria Makarenko how to roll rice, seaweed and seafood into a mouth-watering meal.