People living in a trouble-plagued trailer park in Surrey, B.C., want the province to beef up its laws to better protect their homes. 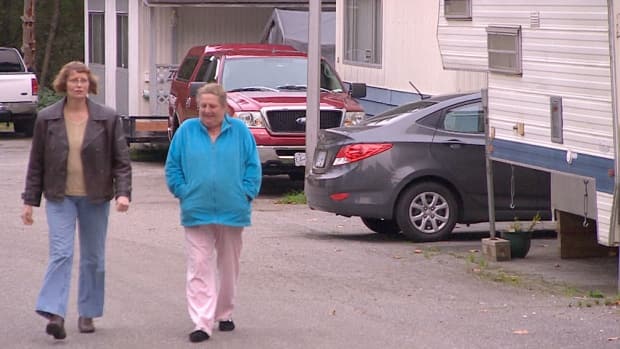 7 years ago
2:13
Tenants in Surrey want the provincial government to step in 2:13

People living in a trouble-plagued trailer park in Surrey, B.C., want the province to beef up its laws to better protect their homes.

The tenants at King George Mobile and RV Park say public buildings are crumbling, amenities are closed and the landlord keeps raising the rent.

They've formed a homeowners society and started a petition to have the provincial government change the Manufactured Home Park Tenancy Act so that specific rent money is set aside for the general maintenance and upkeep of the park.

Elaine Lafontaine, a teacher who's lived in the park for ten years, calls it much-needed affordable housing at just over 700 dollars a month, but claims that prostitution, drug dealing and decay are dragging it down and blames the landlord for not making vital repairs to buildings and pipes.

"He ignores major issues, infrastructure has been deteriorating in our park," says Lafontaine. "We pay for things like snow removal that never really happens in this park."

The owner of the park, Heung Soo Yoo, was unavailable for comment, but tenant and on-site manager Robert Yachuk says he's been helping clean up the site.

"I got rid of five nuisance tenants this week.  I am getting rid of two more nuisance tenants," says Yachuk. He allows that the petition to have the province change the laws has some merit, but there are challenges.

This isn't the first time the King George Mobile and RV Park has been in the news. Last May, a 16-year old girl who lives at the park wrote to Surrey Mayor Dianne Watts, saying she was tired of having to walk home and see drug addicts and prostitutes go into a little trailer beside her grandmother.

Mayor Watts eventually toured the park herself, and wrote to Housing Minister Rich Coleman asking the province to make sure the provincial laws overseeing mobile home parks are being followed.

He responded, but little has happened since.

Infrastructure has been deteriorating in our park.- Resident Elaine Lafontaine

The Housing Ministry says it's aware of the issues raised by the King George tenants, but suggests that people direct their concerns to the City of Surrey or to the Residential Tenancy Branch if they feel those laws are not being followed.

Surrey Newton NDP MLA Harry Bains says he plans to raise this issue when the legislature resumes sitting in the spring.