Doug McCallum won the race for mayor of Surrey Saturday night, capping a remarkable comeback to return to his old job as leader B.C.'s second-largest city.

Doug McCallum won the race for mayor of Surrey Saturday night, capping a remarkable comeback to return to his old job as leader of B.C.'s second-largest city.

McCallum's Surrey Safe Coalition rode a wave of populist anger over the issues of public safety and transportation to ensure almost total domination of council.

The race signified a remarkable rebuke to the Surrey First party that has controlled the city's politics since Dianne Watts first unseated McCallum in 2005.

"Surrey you have sent a message to the rest of the province," McCallum said at his election headquarters on Saturday night.

"We are a great city, a great international city, and you have elected a council that's going to fight for you," McCallum said at his election headquarters Saturday night." 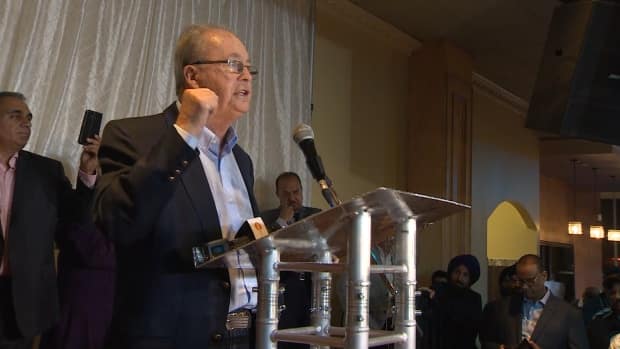 2 years agoVideo
6:39
McCallum defeated his opponents on election night and will be the new mayor of Surrey. 6:39

The victory holds serious implications for the future of some of the biggest issues in the city. McCallum promised to get rid of the existing RCMP detachment in favour of a municipal police force.

He also promised to scrap plans for a light rail connection between Newton and Guildford and replace it with an extension of the SkyTrain service.

At a debate prior to the election, his main opponents grilled McCallum on the cost of his promises, but he offered little detail on the numbers. It is also unclear how he will have the power as mayor to change plans laid down by TransLink.

Tom Gill ran ran on the Surrey First ticket to replace Linda Heppner as mayor. He gave an emotional speech in which he congratulated McCallum. 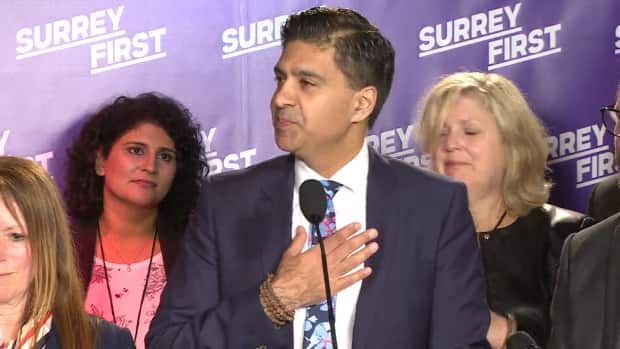 Tom Gill thanks his supporters after losing mayoral race

2 years agoVideo
3:34
Gill was defeated in the Surrey mayoral race by Doug McCallum on election night. 3:34

"I will definitely be on the sidelines cheering on this incredible city," he said. "I've very proud of the campaign we ran."

McCallum's victory echoed the stunning upset in Burnaby, where a political novice defeated one of the Lower Mainland's longest serving mayors by painting the incumbent as tone deaf to the realities facing area residents.

Despite the area's remarkable growth and success in drawing newcomers, McCallum said gang violence and a spate of killings and drive-by shootings have made many feel unsafe in their own homes.

The mechanics of the race itself also came under scrutiny in early October after the city's chief election officer announced that he had "sufficient cause to suspect illegal activity" around the mail ballot process.

Surrey RCMP said they found 67 fraudulent applications to vote by mail when they followed up on 73 people whose personal information was used to complete mail-in ballots.

Police said the fraudulent applications had not been linked to any civic election candidate or party.

They identified and interviewed two persons of interest but had not decided whether criminal charges or charges under the Local Government Act were warranted.

In light of the allegations, ballot packages were made available for in-person pickup only by applicants who provided a signature and photo ID, whereas they had previously been available through the mail.