Surrey mayoral candidates debate their vision of the city's future

Doug McCallum’s big promises for what he would do if elected mayor of Surrey were the centre of a sometimes acrimonious debate on Wednesday evening. 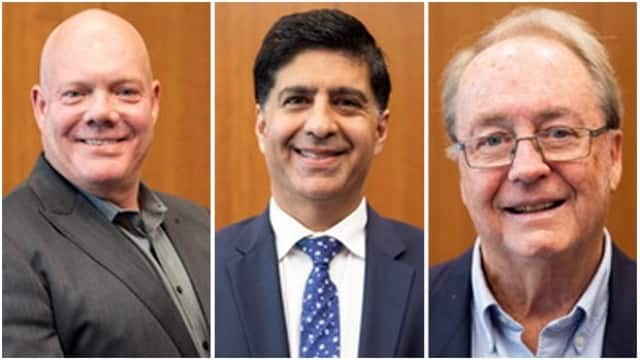 Doug McCallum's big promises for what he would do if elected mayor of Surrey were the centre of a sometimes acrimonious candidates debate on Wednesday evening.

The debate between McCallum, Tom Gill and Bruce Hayne, co-hosted by CBC Vancouver and the University of British Columbia, focused on three topics: transportation, crime and development.

But it really focused on McCallum's three main pledges — getting rid of the RCMP in favour of a municipal police force, stopping plans for light rapid transit in Surrey in favour of lobbying for a SkyTrain line to Langley, and putting a pause on development — and whether they could happen.

"People deserve to know how many police officers there are going to be, and what is the budget, and how you're going to pay for it. People demand to know specifics," said Surrey First candidate Tom Gill, in one of several attacks on McCallum's plans that he said lacked specifics.

While McCallum, who served as mayor from 1996 to 2005, was sometimes inconsistent in providing the specifics Gill kept asking for, he was consistent in his overall message: the RCMP is ineffective, TransLink will listen to Surrey residents if they vote for him, and Gill and Hayne failed to move the city forward as councillors over the last decade.

"Both of you have been on council for eight years, and what have you done about this situation?" said McCallum, after a question about how to reduce the number of portables at schools.

"Both of you are only coming with ideas now because it's election time."

"People demand to know specifics": <a href="https://twitter.com/hashtag/SurreyBC?src=hash&amp;ref_src=twsrc%5Etfw">#SurreyBC</a> mayoral candidates Tom Gill and Doug McCallum clash over McCallum's proposal to create an independent police force and kick out the RCMP. <a href="https://t.co/sOe0DktNqr">pic.twitter.com/sOe0DktNqr</a>

On topic and after topic, the dynamic repeated itself: the three candidates would recite their campaign platform, but when the discussion turned to general debate, Gill or Hayne would criticize McCallum's promises.

"It is not up to the mayor of Surrey to decide what technology we have. It has to be decided at the TransLink board and with senior levels of government," said Hayne, on the question of whether McCallum could guarantee TransLink would reverse course on long-agreed LRT lines to Newton and Guildford.

But McCallum brought up his experience as chair of TransLink while mayor several times, and cited the Golden Ears Bridge when Gill accused him of not being able to create rapid transit when he oversaw the organization.

"TransLink didn't listen to the people in Surrey, didn't consult, just demand that they do light rail … and we need to change that."

On the question of crime, Gill took issue with McCallum's contention that "the city of Surrey is declining in so many ways," referencing RCMP statistics showing the number of major crimes reported has not risen in recent years.

"The perception and reality of crime are different in this city. Make no mistake, when we talk about gangs, it's a regional issue, it's not a Surrey issue," said Gill.

But McCallum argued that drive-by shootings are regularly unreported, and that officers in an independent police force would be trained in urban policing.

The regular battles between Gill and McCallum sometimes left little room for Hayne, who split with Surrey First to create the Integrity Now party earlier this summer.

But he emphasized the need for Surrey's government to not overcommit on promises, instead pledging a more open city hall.

"There's a way to do things that are open, fair transparent and collaborative with the community."