A juvenile transient killer whale was rescued Thursday by scientists after it was stranded for weeks in a small and remote bay on B.C.'s central coast.

Whale called loudly for family while stranded in Weeteeam Bay 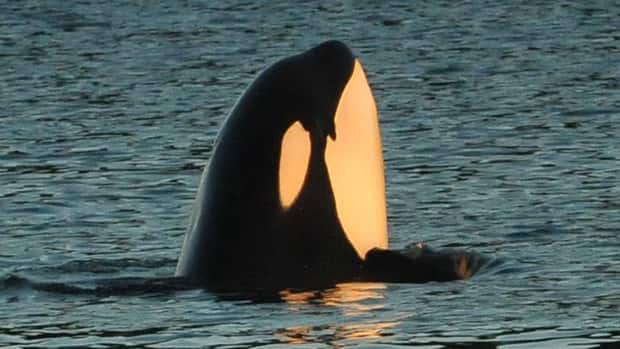 A juvenile transient killer whale was rescued Thursday by scientists after it was stranded for weeks in a small and remote bay on B.C.'s central coast.

The whale, which scientists from the Vancouver Aquarium and the Department of Fisheries and Oceans have named Sam, was found alone in Weeteeam Bay on Aristazabal Island on July 23.

The entrance to the bay is shallow and narrow, and Sam appeared reluctant to pass back through it again on his own, said Lance Barrett-Lennard, director of the Vancouver Aquarium's marine mammal research program.

"When first discovered by a research team anchored in the bay for the night, it was calling for its mother," Barrett-Lennard said in a statement.

Scientists kept a close eye on Sam, hoping the whale would eventually leave the bay himself. But after a few weeks, he remained in the bay and continued to call loudly and repeatedly.

Scientists observed Sam chasing salmon on several occasions, but he did not appear to eat any. He also chased and occasionally caught seabirds. Transient killer whales do not normally eat fish, but prefer seals, sea lions, porpoises and other marine mammals.

Barrett-Lennard said the team made several attempts to entice the whale to leave the harbour by playing transient whale calls with an underwater speaker.

Sam was clearly interested in the calls, but appeared to be afraid of passing through the harbour's entrance.

This week, when Barrett-Lennard again returned to the bay, he noticed the whale had a slight depression behind the blowhole, which is often an indicator of poor nutrition and weight loss.

On Thursday, a team of scientists launched a rescue operation that began just before the high tide.

The team slowly towed a floating line across the harbour toward the entrance while simultaneously playing transient killer whale calls outside the harbour.

According to Barrett-Lennard , Sam "shot" through the entrance "like a cork" and porpoised next to the aquarium's research boat, Skana, before continuing on his way.

Barrett-Lennard will remain in the area for a few days to keep watch over Sam with the hope he is reunited with his family. The whale was last seen heading to sea, continuing to call for his family.

Sam was born in 2009 and is a member of a transient killer whale family that is seen relatively infrequently — the last sighting was two years ago.

Sam was identified based on his uniquely shaped white eye patches, shape of his dorsal fin and scratches and scars on his white saddle patch.

Boaters are asked to keep a lookout for the whale, but to keep their distance and report any sightings to the B.C. Cetacean Sightings Network at 1-866-I-SAW-ONE or by emailing sightings@vanaqua.org.