A group of doctors and health care advocates protested outside a private health clinic in Vancouver Monday, demanding the clinic stop treating patients who are willing to pay for services that are normally covered by the public system. 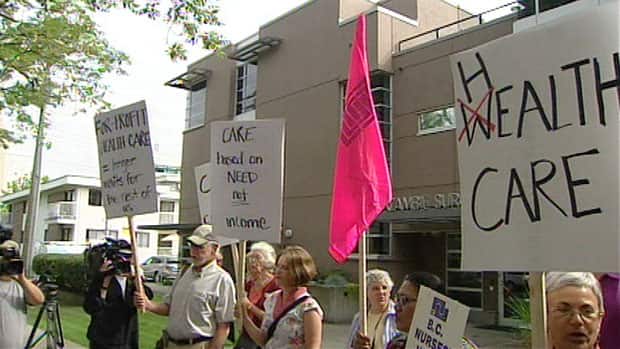 A group of doctors and health care advocates protested outside a private health clinic in Vancouver Monday, demanding the clinic stop treating patients who are willing to pay for services that are normally covered by the public system.

The Cambie Surgical Centre is one of two private clinics ordered by the medical services commission to stop extra billing. Monday is the 30-day deadline for the clinic to comply. Ryan Jabs, a spokesman for the B.C. Ministry of Health, said the province would proceed with an injunction to enforce the order "shortly," but couldn't elaborate.

"There is an issue of equity and justice there, and it's also against the law," said family physician Dr. Vanessa Brcic, who was at the protest.

"So we're drawing attention to that ... asking the public to be aware that the government in not enforcing, it is endorsing a two-tier health care system in Canada."

"Because what ends up happening with clinics like these is that those who can pay do pay and move to front of the line," she said.

"What that does is provide exclusive care for them by doctors and nurses who are taken out of the public system to provide care for the wealthiest folks, and everyone else ends up waiting longer."

Last month, the medical services commission announced it had found 205 bills that were in violation of B.C.'s health care policy totalling almost $500,000.

The commission has no power to impose financial penalties or recover funds from the clinics but ordered an immediate stop to the practice.

Dr. Brian Day, the medical director of the clinics, has said he has no intention to stop the practice. The clinics have already launched a legal challenge of the province's health care laws.

Day said he welcomes the injunction application because it will speed up his case and he's confident of victory.

An injunction would give Day a court platform to argue why he believes the service he provides is necessary.

Day was part of a constitutional challenge launched in 2009, arguing the bar against allowing people to pay for private health care violates their democratic rights.

"How are you going to argue that a 79-year-old cancer sufferer with terminal cancer should be forced to wait 18 months?" he said.

"Cause that's what they're going to have to argue."

Day brushed off Monday's protest and accused those in front of his centre of being union members concerned about health-care workers, not patients.

"The strange irony is that nearly every patient we're treating at Cambie today is a unionized worker," he said.