A mysterious campaign in Kitsilano takes aim at B.C.'s first lieutenant-governor, Sir Joseph William Trutch, who was known for his hard-line views towards the province's First Nations people. 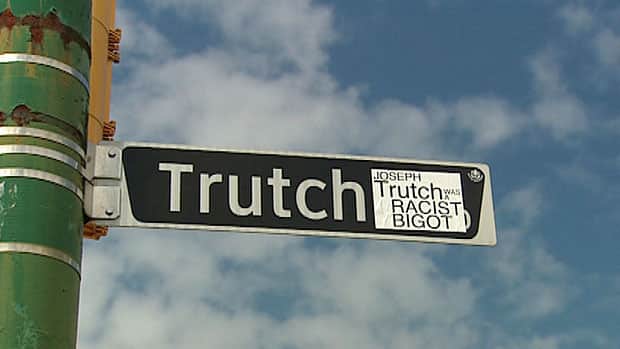 8 years agoVideo
2:13
Someone is defacing street signs that bear the name of B.C.'s first lieutenant-governor 2:13

A mysterious campaign has cropped up in Kitsilano that takes aim at B.C.’s first lieutenant-governor, Sir Joseph William Trutch, who was known for his hard-line views towards the province’s First Nations people.

Several street signs along Trutch Street have been defaced by a large white sticker that reads, "Joseph Trutch was a racist bigot".

Residents say they noticed the signs two or three days ago, but the person or group behind the sticker campaign remains a mystery.

Trutch was an Englishman who grew up in Jamaica and came to British Columbia in the late 1850s.  He engineered a bridge to move gold across the Fraser River near Spuzzum and was later named Chief Commissioner of Lands and Works.

"He seems to have been a really extreme version of the attitudes of the time in terms of thinking that native people were non-people," says author Michael Kluckner.

Under his Indian land policy, Trutch confirmed the practice of not recognizing aboriginal title.

He also made sure Indian reserves were small, quickly overturning the generous and inclusive decisions of his colonial predecessor, Governor James Douglas.

"He reduced the reserves that Douglas had allowed for by 92% and changed the laws so that a Sto:lo family could only occupy about 10 acres of land," says Kluckner.

Trutch went on to be the first lieutenant-governor of B.C. in 1871, when the province decided to join Confederation.

"His policies and the policies of the government of the time were perfectly in keeping with serving the needs of the British government," says documentary filmmaker Vince Hemingson.

"They were terrible for the First Nations people of British Columbia."

With files from the CBC’s Belle Puri