Prime Minister Stephen Harper landed in Kelowna, B.C., Friday for a meeting with his B.C. caucus, with the expectation much of the talk would be about oil and pipelines. 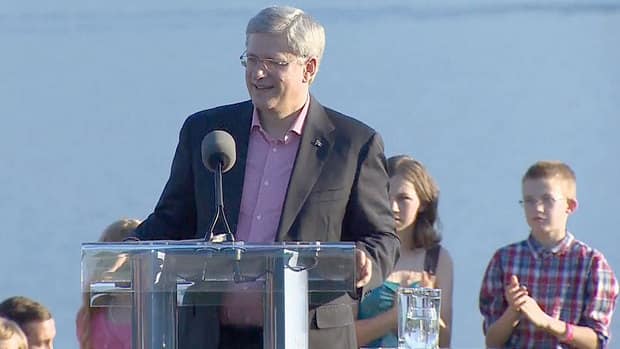 Prime Minister Stephen Harper has landed in Kelowna, B.C., Friday for a meeting with his B.C. caucus, with the expectation much of the talk would be about oil and pipelines.

While the Prime Minister's Office released few details about the agenda, it did tweet a picture of Harper and his MPs at the caucus meeting.

Later Harper and his MPs met with local supporters at a Conservative Party barbeque at the Quails Gate Winery in West Kelowna.

The prime minister gave an 18-minute speech at the event, but made no mention of oil or pipelines, instead focusing on his government's achievements since being elected in 2006.

Sources have told the CBC's Chris Hall the B.C. trip is part of the prime minister's push to build support for the Northern Gateway and Kinder Morgan pipeline projects.

Starting Monday, Harper has directed key ministers to head to B.C. to meet with First Nations and other leaders.

The new initiative is in large part a response to a report from the prime minister's special pipelines representative in British Columbia, Douglas Eyford, who told Harper last month that negotiations with First Nations — especially on Enbridge's proposed Northern Gateway — are a mess.

Eyford urged the federal government to take the lead role in dealing with Indian bands on both the Gateway project and the proposed expansion of Kinder Morgan's Trans-Mountain pipeline.

But Grand Chief Stewart Phillip, the president of the Union of B.C. Indian Chiefs, told CBC News there is little support among First Nations groups for the Enbridge pipeline project.

"There is no evidence that this is the case that there are a significant number of First Nations communities that are actively involved in being part of this project," said Phillip.

Phillips said he worries the federal government is meeting with the leaders just to fulfil the requirement of consulting with First Nations on the issue.