A B.C. woman has lost her lawsuit against Starbucks after burning her legs with tea she said the beverage giant served too hot.

A B.C. woman has lost her lawsuit against Starbucks after burning her legs with tea she said the beverage giant served too hot.

The judge ruled Starbucks was not liable for the burns. He ruled the woman failed to prove the cup was defective and the beverage too hot, as claimed.

According to court documents, Shayla Williams was in the passenger's seat of her mother's car when the two stopped at a Starbucks drive-through in Sechelt, B.C., Sept. 30, 2013, to order a  tea, a hot water and a panini.

Her mother then drove a short distance — 100 to 130 metres, according to the lawsuit — but when the vehicle came to a stop, Williams testified that the lid "popped off," spilling the tea primarily on her left thigh.

She was promptly taken to the hospital, where the judge says she was treated for second and third-degree burns.

In her lawsuit, Williams claimed that the cup was defective, the lid was improperly placed, and the tea was served hotter than it should have been, its temperature distorting the cup and causing the lid to come off.

Starbucks testified that it does indeed serve tea hot enough to cause injury, but that its employees are instructed to always check lids before giving beverages to customers.

According to testimony from the manager, the store's water heating machine dispenses water at 86 C and automatically shuts off when the water reaches 93 C.

Though provincial court Judge Steven Merrick expressed sympathy for Williams' injuries, he found no basis for any of her allegations against Starbucks.

"The reality is that products may be inherently dangerous and capable of causing injury but that does not mean that they are defective nor does it automatically mean that ... the manufacturer or seller is liable [if injury results]," Merrick wrote in his judgment.

"Extremely hot beverages are served in these types of cups and lids on a daily basis without incident."

Williams' lawyer, James Mandick, said he and his client knew the case would be an uphill battle. In his research, he was not able to find a single case of Starbucks losing a lawsuit over injuries from a hot beverage.

"All over North America, they're very successful at defending these claims," Mandick said.

In 2013, CBC News found that tea is often served above 80 degrees at drive-throughs throughout the Lower Mainland: 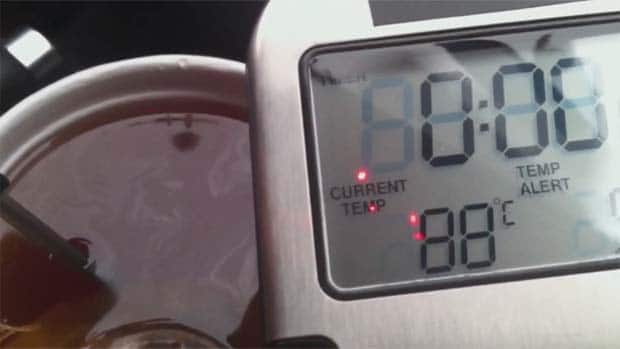