Vancouver's Stanley Park Seawall attracts throngs of visitors during these warm summer months, and with them comes frequent opportunities for accidents along the busy, narrow path. 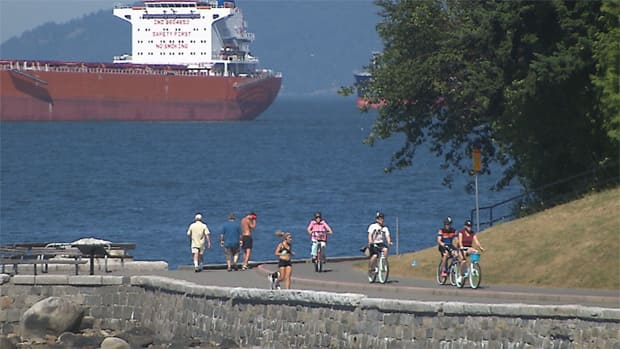 6 years ago
2:14
Locals say tourists aren't always the ones to blame for close calls on Stanley Park's most popular path 2:14

When most people think of the Seawall, one of Vancouver’s most popular seaside destinations, rage is not the first thing that comes to mind.

But after a particularly frustrating jog on one of the city’s top attractions, personal trainer Jesse Evjenth wasn’t feeling the laid-back West Coast vibe.

“Everybody was kind of cutting me off or had some wardrobe malfunction,” says Evjenth. “I even stepped in dog poop that day — a bag of it.”

Evjenth says he often collides with people who stop suddenly and without warning. He’s also been hit by cyclists as he swerved to get out of way of inattentive pedestrians with headphones on.

To vent his frustrations, Evjenth wrote a blog post about his experiences. It includes tips for people who use the local hotspot. He asks slower runners and walkers to keep to the right of the path, and requests that cyclist use their bells to warn others when they are passing.

Vancouver Board of Parks and Recreation environment planner Alan Duncan says Evjenth’s experiences aren’t unusual, and all visitors frequenting the Seawall need to use common sense.

“If you’re going to stop and talk or take a picture, step out of the way,” says Duncan.

Also, Duncan recommends that cyclists with a need for speed consider alternate routes.

“If you want to go really fast on your bike, doing it in July and August probably isn’t the time to be on the Seawall,” says Duncan.

He suggests that high-speed cyclists take Stanley Park Drive instead. Cars are limited to 30 km/h on the perimeter road and it too offers stunning views.

Duncan also says that inattentiveness due to mobile devices is common for pedestrians and cyclists alike.

“You’re not supposed to be texting while you’re riding in traffic, just as the driver of a car or a truck aren’t allowed to do that either.”

As for cyclists riding the wrong way, don’t be too quick to blame tourists. Duncan says locals looking for a short-cut from English Bay to Third Beach are most often the cause of trouble. For them, he recommends taking one of the many trails that provide access through Stanley Park instead.

According to Duncan, the Parks Board has tried increasing signs with courtesy tips, but past experiences have shown that people prefer unobstructed views of the sunset.

“Signage is a real tricky one because people come here for the natural beauty,” says Duncan.

Instead, the Park Board is considering increasing wayfinding maps and partnering with local bicycle rental shops to offer more information.

As for Evjenth, he thinks the answer to respectfully using the popular attraction is relatively simple.

“Enjoy yourself, but also be courteous of other people.”

What are your Seawall pet peeves? Tell us in the comments section below.