David Leonati, Michael MacDonald and Carlos Barahona-Villeda found guilty of participating in a riot and assault. 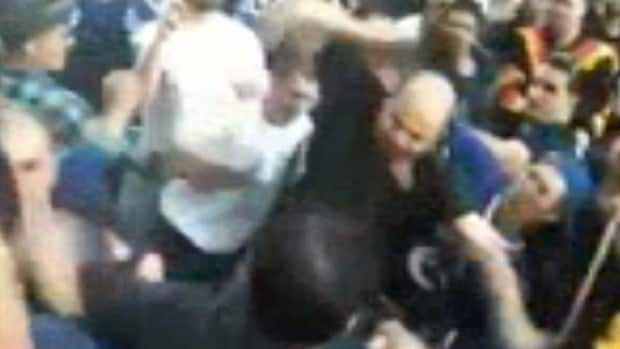 Three men who took part in an attack outside The Bay department store during the 2011 Stanley Cup riot have been found guilty of participating in a riot and assault.

David Leonati, Michael MacDonald and Carlos Barahona-Villeda were part of an angry mob that attacked Good Samaritan Robert MacKay after he tried to prevent them from breaking into the West Georgia Street store.

The attack was recorded on video and posted to YouTube.

Kangles claimed that he was trying to defend others and Judge Gregory Rideout agreed, saying that it was hard to see in the video whether the defendant kicked MacKay.

The video shows MacKay being swarmed, with rioters kicking and punching him, dragging him to the ground and dousing him with pepper spray.

Police said afterwards that they had identified 15 suspects in the attack.

In May last year, two men were found guilty and sentenced to 9½ months for their participation in the attack.

According to the Vancouver Police Department, 294 people have been charged in connection with the riot.

Dozens of people have already pleaded guilty and received their sentences, ranging from discharges to jail terms of a year or more.

With files from CBC's Richard Zussman and The Canadian Press