RCMP says they believe someone deliberately cut the cables of the Sea-to-Sky gondola in Squamish, B.C., which crashed into the ground overnight Saturday.

Almost all of the 30 gondola cars attached to the cable crashed to the ground around 4 a.m. on Saturday

The gondola, which wasn't operating at the time, normally carries up to 240 passengers at a time on its 30 cars. The trip from the base to the summit 885 metres above sea level lasts approximately 10 minutes and gives visitors views over Howe Sound. It is a major tourist destination in B.C.

"We believe the cables were cut and this was a deliberate act of vandalism, " said Inspector Kara Triance with Squamish RCMP.

Almost all of the 30 gondola cars attached to the cable crashed to the ground at around 4 a.m., according to staff working overnight. No injuries have been reported as a result of the incident.

"It's just an incredibly unusual thing to happen," said Kirby Brown, Sea-to-Sky's general manager. "We just did our maintenance on the line very recently and it was a big, thick, beautiful healthy rope."

Hikers camping in the area say they were woken by loud banging and sounds of metal scraping.

The cable is 55 millimetres in diameter and is made up of six strands. It regularly transports several tonnes when the gondola cars are loaded and is made to withstand most weather events, said Brown.

Triance said RCMP investigators are working with multiple investigators on the ground including WorkSafeBC and Technical Safety BC, an independent organization that oversees heavy equipment in the province.

"[The experts] know the difference between a compromised cable and something that would be cut deliberately," Triance said.

She said in order to access the cable, the perpetrator could have hiked the trail underneath the gondola and climbed up one of the maintenance poles on the route, which have ladders attached.

"They put themselves in extreme jeopardy, not only the nature of the action of climbing up that pole and being in that position … but also the velocity at which the cable would unravel at that point," she said.

As for the damage, Triance said this act has cost over $1 million in property damage, not to mention lost revenue. If there were people on board the gondola, she says the results could have been "catastrophic."

See the damage close up 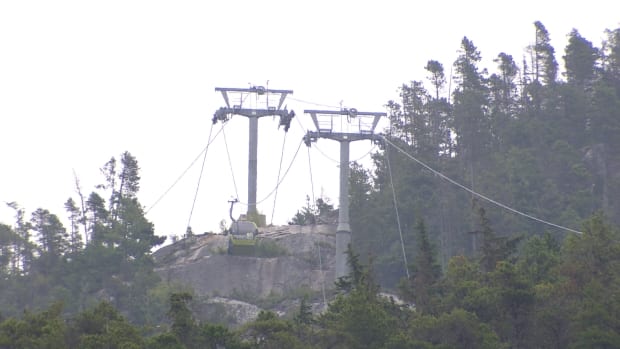 2 years ago
0:41
RCMP are investigating what they say is a deliberate act of vandalism that caused the cars to crash down. 0:41

BC Parks says it has closed three trails directly under the gondola that were affected by the crash. The trails closed are the Sea to Summit Trail, the Shannon Falls Connector Trail, and the Upper Shannon Falls Trail.

RCMP officers are canvassing a large geographic area for their investigation.

"The trails in the area may have been used to access the gondola line," said Triance.

"We know that there were people that hiked to the top of the [Stawamus Chief Mountain] this morning, and we are asking that anybody in the area that did hike the trails to come speak to police. We're looking for witnesses."

Brown said the cable and cars can be fixed or replaced, but the company's main priority is the investigation.

"We've got a lot of hours ahead of us of really coming to grips with what occurred before we get focused on the fix."