The orphaned orca that was captured and released back to her pod more than a decade ago has had her first calf, officials announced today. 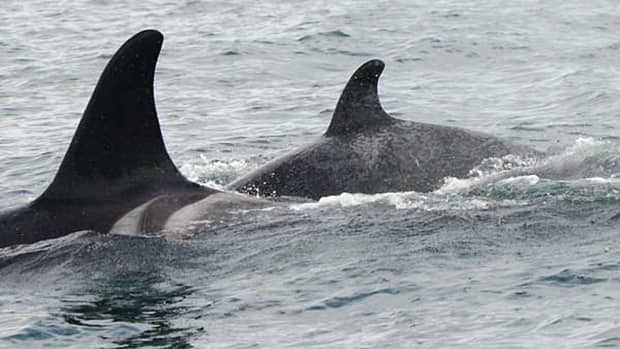 The orphaned orca that was captured and released back to her pod more than a decade ago has had her first calf, officials announced today.

Officials with the Department of Fisheries and Oceans said 'Springer,' now a 13-year-old, was spotted with her young calf on July 4 off the North Coast of B.C. near Bella Bella by biologist Graeme Ellis.

"We have been expecting her to give birth one of these years. She has just reached that age, and to me it was going to be the ultimate sign that this whole re-introduction was a success," said Ellis.

Fisheries biologist John Ford said there is a high mortality rate for killer whales in their first year, but said both mother and calf appear to be doing well. The sex of the calf has not been determined yet.

"Both appear to be robust and doing very well," said Ford.

Springer, who is officially known as A-73, first rose to fame when she turned up in Puget Sound near Seattle around 2002.

Experts already knew the orphaned juvenile had become separated from her pod after her mother died and had failed in one attempt to join another pod of killer whales.

The lonely orca appeared to be in poor health and attempting to make friends with boats and logs. U.S. officials determined she was unlikely to survive on her own in the busy shipping lane and captured her.

She was kept in a net pen for a month to nurse her back to health and then transported to Blackfish Sound at the north end of Vancouver Island to be reunited with her original pod, known as A-4.

Shortly after Springer arrived, the pod was spotted in the area and officials made the decision to immediately release Springer, who was now in great health, and over the next few weeks she was spotted slowly reintegrating with her pod.

Every year since then officials have been monitoring her progress in the pod.

Officials say Springer is the first known case of a killer whale being captured, rehabilitated and successfully released back to their pod.

Biologists say female killer whales normally stay with their pod for their whole life, and each pod shares unique vocalizations, which likely helped Springer reintegrate with her extended family.