Spirit of the West's John Mann, 57, dies after battle with Alzheimer's

Music icon John Mann, the frontman of the Canadian rock band Spirit of the West whose career spanned nearly 40 years, has died at age 57.

Songs and lyrics 'will be remembered for generations,' bandmate says

Mann, whose career spanned nearly 40 years, was best known as the frontman of the folk-rock band Spirit of the West.

He died peacefully surrounded by friends and family in Vancouver on Wednesday.

"His songs, and his lyrics particularly, will be remembered for generations," said Vince Ditrich, the band's drummer and manager.

"He had such a gift for finding the universal in the everyday."

A four-time Juno nominee for his work with Spirit of the West, Mann and his Vancouver band became underground heroes for their politically savvy, musically diverse songwriting, which fused traditional strains of folk, Celtic and turn-of-the-'90s alt-rock.

Watch Mann perform at a fundraiser Toronto, after being diagnosed with early-onset Alzheimer's: 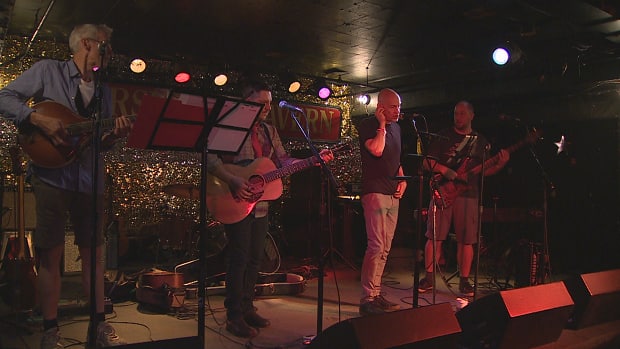 "John was so powerful and so charismatic," said Ditrich about Mann's on-stage performances. "I don't know if I've ever known anyone as charismatic."

Mann had battled early-onset Alzheimer's disease since 2014 and spoke publicly about his struggles.

He was diagnosed in his early 50s, while in remission for colorectal cancer, but continued performing for as long as he could — using an iPad to remember the lyrics. When he could no longer perform, he tried alternative treatments for Alzheimer's such as stem cell therapy.

"He was graceful under the most dreadful of circumstances," said Ditrich. "John was very kind, very gentle and very wise."

His wife, playwright Jill Daum, later wrote a stage production about a family's experience with degenerative disease that mirrored her own life.

In 1983, he first hooked up with Geoffrey Kelly and J. Knutson and formed the trio Eavesdropper, though they would change their name to Spirit of the West by the time they independently released their self-titled debut in 1984.

Spirit of the West signed to Warner Bros. Records in 1989 and was active until 2016, releasing many hits over the decades including Political, Save This House and Faithlift.

"His work will resound long after his untimely passing," his publicist Eric Alper said in a statement.

Mann is survived by his wife and grown children Harlan and Hattie.

A private memorial service will be held later.