A sperm whale has been confirmed on Vancouver Island's eastern coast for the first time since 1984.

The booming clicks coming from an underwater microphone placed in the waters of B.C.'s Johnstone Strait could only have been one animal — a sperm whale.

When cetacean ecologist Jared Towers and his colleagues first heard the calls from the mammal travelling through the strait several days ago, they were shocked. The last time a sperm whale was confirmed on Vancouver Island's eastern coast was an audio recording in 1984.

"Personally, I've worked and lived in this area almost all my life, over 30 years, and I've never known of a sperm whale sighting in this area or in any coastal waters of British Columbia," Towers told CBC News.

But experts at Fisheries and Oceans Canada confirmed it was indeed a sperm whale, and on Monday Towers saw the young male cetacean in the flesh, hanging out near a group of transient killer whales.

"Like they say, seeing is believing. We knew it was there because we could hear it, but you get a whole other appreciation for it when you're face to face with an animal of that size," Towers said. 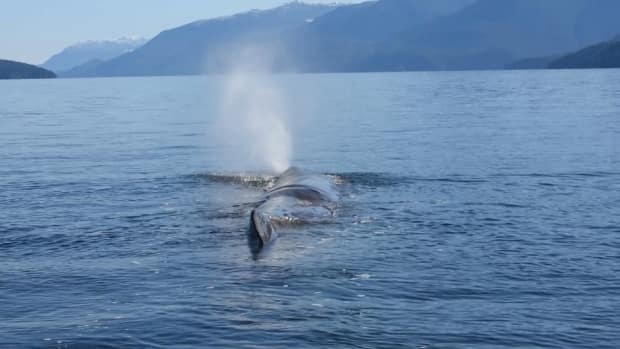 It was a team effort to find the whale. When Towers and whale researcher Lisa Larsson headed out on the water, they kept a hydrophone — an underwater microphone — on board to track it.

Meanwhile, Paul Spong and Helena Symonds were onshore at the OrcaLab research station on nearby Hanson Island, giving directions as they listened in.

The sperm whale's unique characteristics made it easy to spot from afar. The species has one blowhole, positioned at an angle on the head.

"Unlikely any other species of whale, the sperm whale blow is at a 45-degree angle," Towers explained.

Up close, the animal's lumpy, bumpy body was unmistakable as a sperm whale. The whales also have huge heads, making up about a third of the length of their bodies.

Towers believes this whale is a juvenile, measuring an estimated 12 metres in length, compared to the 20 metres that some adult males can reach.

The whale has been in the strait for about a week, but it's not clear why it made the journey into the inside passage.

Lance Barrett-Lennard, senior marine mammal scientist at the Vancouver Aquarium, speculates it was following its appetite.

"They're pretty food-driven, so it's quite likely ... that this one followed some density of prey into that area, likely coming in from the north," he said.

The animals are usually found far offshore, on the edge of the continental shelf, where they can search for their preferred food — squid and other cephalopods — in deep water.

No matter the animal's reason for visiting, the sighting was a thrilling one for Towers.

"They're quite remarkable. They're just cool," he said of the species. "They have the biggest brain on the planet.... It's hard to really know exactly how intelligent they are."

The average sperm whale brain weighs about 7.8 kilograms, compared to an average of about 1.3-1.4 kilograms for human brains.

And as it turns out, sperm whales are crafty and adaptable predators.

In recent years, sperm whales in Alaska and B.C. have learned to score easy meals by hanging around longline fishing boats to steal their catch, according to Barrett-Lennard. It's known as depredation, and it can lead to significant economic losses.

"They look for the most nutritious food and the easiest way to acquire it all the time. That's what animals do," he said.

And they have good taste, favouring black cod — otherwise known as sablefish, a favourite in B.C. restaurants.

Back in Johnstone Strait, Towers plans to keep monitoring the sperm whale by hydrophone as it moves through the strait and may try to spot it again if the weather co-operates.