BC Hydro says that at one point on Saturday, the storm knocked out power to more than 70,000 customers.

At the height of the storm, 70,000 customers had power knocked out

More than 12,000 customers were still without power in British Columbia early Sunday morning following a windstorm.

BC Hydro says that at one point on Saturday, the storm knocked out power to more than 70,000 customers.

The hardest hit areas were in the Lower Mainland and Sunshine Coast, along with southern Vancouver Island.

Environment Canada says the region isn't out of the woods yet. The Metro Vancouver area was subject to a special weather statement, with the national forecaster predicting a weaker storm.

BC Hydro is asking residents to make sure they have emergency supplies.

Retired farmer Jom Gardiner struggled to get his generator to work on Saturday in Langley as he coped with the strong winds that knocked out his power. But he was taking the weather in stride.

As we look ahead into the evening, Kevin Aquino from our media team shares a quick update on restoration efforts today and our thanks for your patience as crews work to bring everyone back safely following <a href="https://twitter.com/hashtag/BCStorm?src=hash&amp;ref_src=twsrc%5Etfw">#BCStorm</a> impacts. <a href="https://t.co/PzVcWzKXN9">pic.twitter.com/PzVcWzKXN9</a>

"We're accustomed to outages," he said. "This happens once in a while. We have flashlights and stuff like that."

The storm caused numerous BC Ferries sailing cancellations between Horseshoe Bay, northwest of Vancouver, and the Sunshine Coast, and Nanaimo on Vancouver Island.

The wind was so strong that a barge partially sank at Sewell's Marina in Horseshoe Bay on Saturday morning.

Tess Baker said she was waiting for the ferry when she saw a "big cement barge carrying speedboats and Zodiacs" tip over and sink.

It appeared that about nine boats have also been swept up onto the beach, Baker said. "It's windier than I've ever seen it here in the harbour." 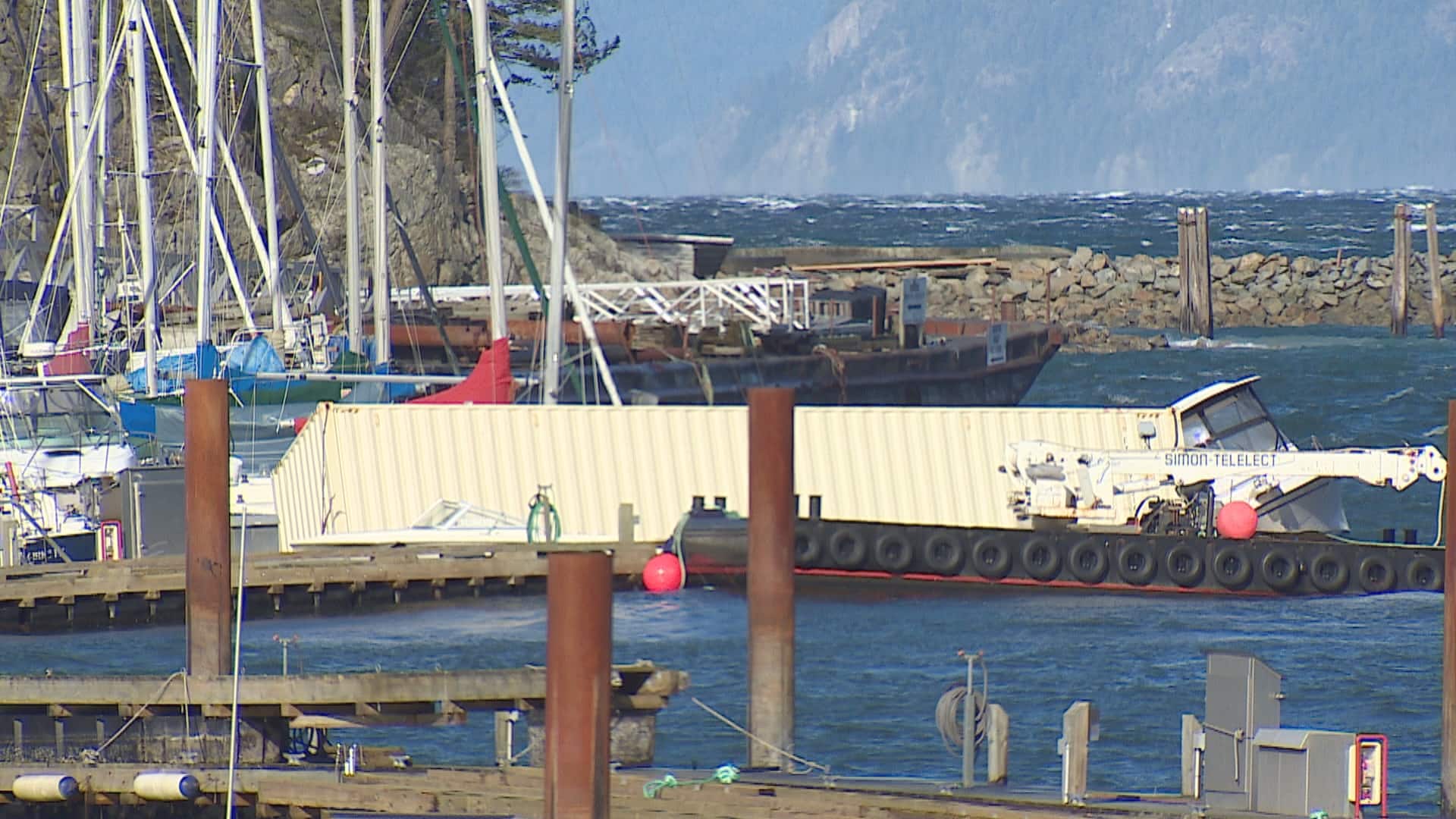 The Canadian Coast Guard said in an email that the barge capsized as a result of the storm. It said several rental boats, as well as used oil and fuel drums, ended up in the water.

The Coast Guard said it is also ready to assist if needed.

Officials warn that downed power lines should always be assumed to be live and are considered an emergency situation. If you come across one, stay 10 metres away and call 911, they urge.

Wind and snow warnings are in effect for Metro Vancouver, the Fraser Valley, Victoria, eastern Vancouver Island and the southern Gulf Islands. Winds are expected to gust up to 90 kilometres per hour.

Meanwhile, Environment Canada says snow across the South Coast is possible, with up to 10 centimetres in some places, such as southern Vancouver Island.