A wildlife rescue and rehabilitation group in Delta, B.C., says it has seen a record number of hungry birds of prey, snowy owls in particular, coming through its facility this winter. 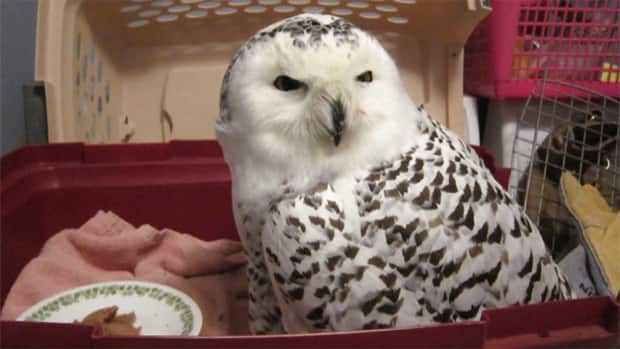 8 years agoVideo
2:15
A rescue organization says some of the arctic-based raptors have starved to death 2:15

A wildlife rescue and rehabilitation group in Delta, B.C., says it has seen a record number of hungry birds of prey, snowy owls in particular, coming through its facility this winter.

A number of snowy owls have been migrating south from the Arctic tundra to Boundary Bay, an area recognized internationally as an important bird habitat on the Pacific Flyway migration route.

They're visible from the dike along the bay, hunting for voles or small birds in the brush, or resting on old washed-up tree trunks — a total of 22 snowy owls were spotted on Boxing Day.

Rob Hope, head bird-care supervisor at the nearby Orphaned Wildlife Rehabilitation Society (O.W.L.), said not all the owls are making the winter journey from the Arctic in good health.

"They were coming down earlier [this year] for some reason, whether it's food or weather. But by the time they get down, their body conditions are so poor," he said.

Hope showed the CBC a photo of a starving, emaciated snowy owl that was found last week in Hope. The rehabilitation group tried to feed it cat food but it wouldn't eat, and it died.

Hope said the group has taken in six other birds in similar condition.

"Basically, the muscle was so deteriorated that there was nothing but a rib cage," he said.

"Usually by the time we get them or they're rescued, it's pretty well too late."