A building manager in Vancouver's West End who has been blocking the installation of smart meters says BC Hydro has being aggressively pushing his building's tenants with the threat of $35 monthly fees. 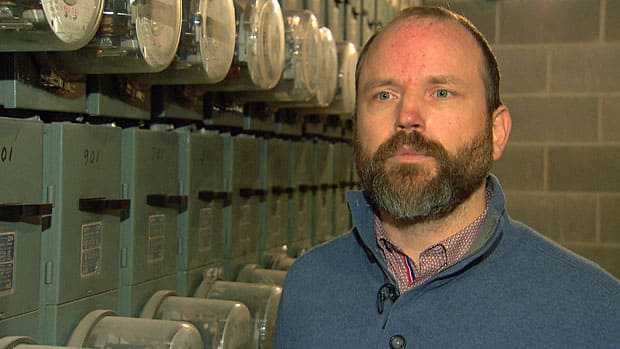 7 years ago
2:11
Tenants say they're caught between BC Hydro and building manager 2:11

A building manager in Vancouver's West End who has been blocking the installation of smart meters says BC Hydro has being aggressively pushing his building's tenants with the threat of $35 monthly fees.

Damon Johnson is the property manager of Lancaster House, a 17-floor apartment building on Bute Street in Vancouver's West End, and he's been stopping smart meter installers from entering the building since March.

"I have some health issues. I just don't want to exacerbate my health issues to be a guinea pig for BC Hydro's technology," he told CBC News.

He argues smart meters, which deliver data through high-frequency radio waves, are too close for comfort for him.

"My office is directly above. I'm about 10 feet away from 73 [smart] meters emitting radio frequency energy."

He said BC Hydro crews have already installed 16 smart meters in the electrical room without his permission, and now he's changed the locks. He wants the old meters left as they are, but that will result in a $35 monthly fee for each account.

"I can't be having my electrical bill go up to take care of something that I have no control over," she said.

Faith doesn't want to pay $35 more per month, but also isn't comfortable signing off on the installation of a new meter for her unit. She says the rental contract she signed prohibits her, a tenant, from changing the building's infrastructure.

She supports the building manager's move to block BC Hydro's installers, and his request for a flat $35 dollar fee to cover reading all the old meters in the building.

But BC Hydro spokeswoman Mora Scott says the building manager is overstepping his authority.

"Our contract is with our customers individually and, just like a bank, we can't have a third party act on their behalf."

Scott said that 31 tenants in the building have agreed to change to the new smart meters. Provincewide, 97 per cent of BC Hydro customers have agreed to the installation of the new meters, and around 60,000 customers still need to switch over.

BC Hydro says for those residents, the only solution to keep the old meters is to each pay $35 a month more.

With files from the CBC's Chad Pawson and Meera Bains