The man convicted in connection with the slaughter of 56 sled dogs after the 2010 Olympics in Vancouver has been handed a sentence of three years' probation with no jail time, plus a $1,500 fine. 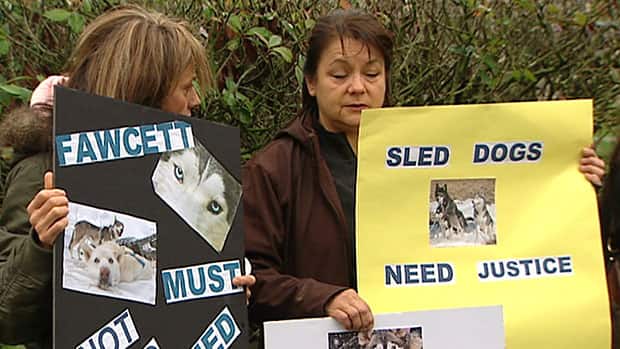 8 years ago
2:06
The Crown recommends the man charged with slaughtering sled dogs not serve jail time 2:06

The man convicted in connection with the slaughter of 56 sled dogs after the 2010 Olympics in Vancouver has been handed a sentence of three years' probation with no jail time, plus a $1,500 fine.

The sentence was delivered Thursday in a North Vancouver courtroom against former dog handler Robert Fawcett.

The 56 dogs were disinterred from a mass grave near Whistler by the B.C. SPCA after details of the killings came to light in January 2011.

Fawcett admitted to slaughtering the sled dogs and burying them in a pit on his property, claiming he had no other option when the sled dog industry collapsed following the Olympics.

He faced a maximum penalty of five years in prison and $75,000 in fines after pleading guilty to causing unnecessary pain and suffering to nine of the animals.

The dogs at the Whistler-based company were killed shortly after the Olympics ended, but the slaughter wasn't detected until nearly a year later when documents surfaced showing Fawcett had filed a WorkSafeBC claim for post-traumatic stress.

After the information leaked out about the cull, Fawcett and the company that bought his business, Outdoor Adventures, issued a statement in February 2011 that many of the dogs were old and sick, and efforts to have them adopted were unsuccessful.

The company said no instructions were provided to Fawcett on how to kill the animals, but that he was known to have put down dogs humanely on previous occasions.