A Richmond woman has renewed her call for a ban on Chinese-only signage, after ads for Crest toothpaste appeared in several city bus shelters. 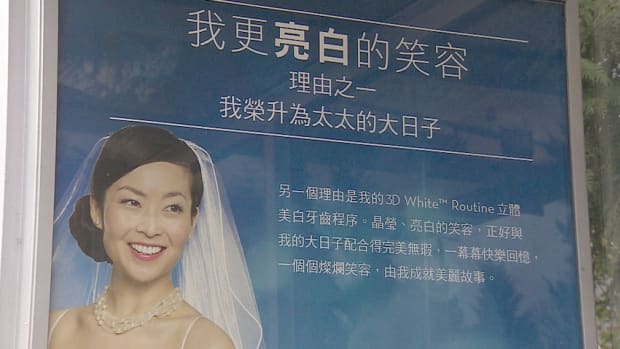 7 years ago
2:30
Should English should be required on all Metro Vancouver signs? 2:30

A Richmond woman has renewed her call for a ban on Chinese-only signage after ads for Crest toothpaste appeared in several city bus shelters.

Kerry Starchuk says advertising only in a language other than English or French acts to isolate people rather than bring them together, which she believes is a threat to multiculturalism.

"If we can work together and be honest with one another and have this inclusive community which includes our official languages where we communicate with one another, that is the utmost important thing," she said.

"We can work on what holds us together as Canadians."

In an email to CBC, Procter and Gamble spokesperson Victoria Maybee said the company values the rich diversity of Canadians.

"We continuously strive to connect with all consumers in relevant ways," said Maybee.

"While the vast majority of our advertising remains in one or both of Canada's official languages, this unique ad was created to reach a new audience of diverse consumers."

Starchuck is frustrated governments aren't addressing the issue more than a decade after it first came to light.

"It still keeps coming. There doesn't seem to be a solution. I didn't realize it was a contentious issue in the beginning, I've never done this before. But I would like our community to include every culture."

Last year when the issue was raised, Richmond City Council voted against pursuing a ban on Chinese-only signs.

At the time, Coun. Derek Dang said protesters who brought a 1,000 name petition to city hall were in a slim minority.

In Greater Vancouver, the number of people whose mother tongue is something other than French or English is now nearly one million people.

But the combined number of people who spoke either Cantonese, Mandarin or an unspecified Chinese language accounted for 40 per cent of those who reported speaking an immigrant language most often at home.

With files from Steve Lus