A CBC News investigation has traced the path of a couple who paid little or no rent at at least five properties where they have lived over the past two years. Their landlords say it's time for a bad tenant registry. 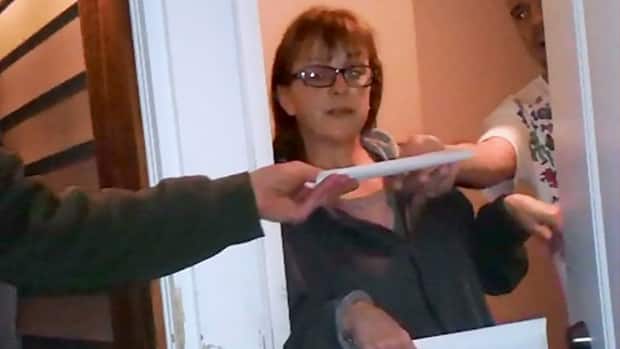 B.C. landlords are calling for a bad tenant registry after several became unwilling targets of a pair of apparent serially-delinquent renters.

Kim Gouws said she hasn't seen a penny of the $5,000 she's owed from the couple who lived in her Maple Ridge rental unit since the end of January.

The pair pushed to move in early, on January 26th. Gouws only later learned that was likely because they'd just been served with an eviction notice five days earlier.

"We did a lot to allow them to come in when they wanted to," she said. "And then the original rent cheque and the deposit cheque bounced."

Just over two months later, the pair are now gone, but Gouws isn't the first landlord who lost rent money and pushed to evict the pair.

"She's been doing this all in a row." Gouws said. "She just been going from one to the other to the other and I don't know if those people get paid anything."

A CBC News investigation found that the couple, Susan and Chris Perret, have lived nearly rent-free in at least five homes over the past two years. CBC News found records going back to August 2012, when the pair were evicted from one Maple Ridge home.

Then, in late 2012 and early 2013, the couple lived in Suman Parasad's rental property in Maple Ridge. Parasad said for four months they ignored her eviction order.

"They refused, and the last time I went and asked, she said 'I'll go when I want to.' That really made me angry, and so I called the court bailiffs and said, 'evict them right now,'" Parasad said.

"It hurt me really badly, financially." Parasad said. "I am not going to let them go. I want my money, simple as that. I work very hard for it and I want my money."

After winning at the residential tenancy hearing, Parasad took her complaint to small claims court. After several hearings, the Perrets have begun to slowly pay her back at the rate of $450 per month.

Records show that the Perrets were then evicted from another Maple Ridge home in October 2013, and then moved into Noel Beaulieu's property in Mission in November.

One month's rent cleared, but the other cheques were returned, marked "not sufficient funds." Beaulieu says he is out $1,500.

Beaulieu was able to get an eviction notice in late January, and videotaped the whole thing. He said the Perrets seemed to know it was coming.

"They knew more about the Residential Tenancy Act than we did. They knew all the steps and they were anticipating each step as we took it," he said.

CBC's Natalie Clancy reached Susan Perret by telephone, and asked why she wasn't paying rent for months at the properties on record.

"Well, there's a whole bunch of issues for everybody, right?" Perret said.

On Monday, Perret promised her lawyer would tell her side of the story, but that hasn't happened yet.

Knowing they are the fifth landlord to lose out on rent from the Perrets, Gouws says it's time the Residential Tenancy Branch make available a list of bad tenants.

"The Residential Tenancy Act should have had their names on there so we could call in and say, 'I would like to rent to these people' and what they could say to me would be 'I would not recommend that,'" Gouws said.

As it stands, she says it's too easy for repeat non-payers to keep living rent-free.

"The system doesn't really work for the landlords. I think it works much more for the tenants," Gouws said