Four men trying to row the Northwest Passage decided to end their voyage early in Cambridge Bay and returned to Vancouver this weekend. The men say they encountered grizzly bears and beavers during their strange, difficult journey. 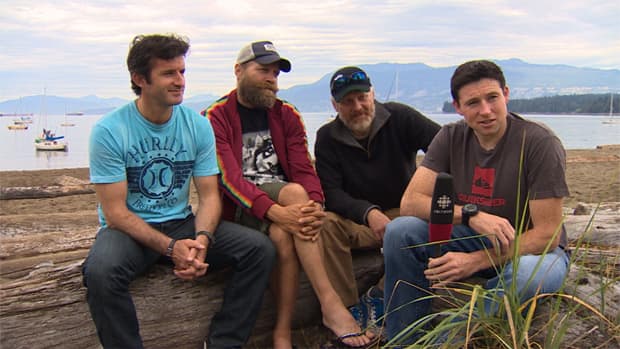 8 years ago
2:18
Four men bound for Pond Inlet turned back at Cambridge Bay 2:18

The four men trying to row the Northwest Passage from west to east arrived back in Vancouver this weekend after deciding to end their voyage early when sea ice and winds made their trip too difficult to complete.

The crew rowed out of Inuvik, Northwest Territories at the beginning of July, intending to row 3,000 kilometres to Pond Inlet by the end of September.

When the crew of Arctic Joule arrived in Cambridge Bay, Nunavut Wednesday night, rower Kevin Vallely said they realized it would take too long to reach Pond Inlet, Nunavut.

"There's really a point where you have to say that's the limit and we want to do this safely," Vallely said.

"We don't want to risk our lives and certainly not the lives of others having ultimately to come to a rescue that's sort of written in stone if we go any further."

They were aiming to raise awareness about climate change by rowing through areas previously covered in ice, but in the end, they didn't find what they were expecting.

Constant headwinds winds slowed them down, making it faster to get out and push than try to row at times.

"[It's] very, very difficult to move this boat into any sort of a strong wind, so the winds really were the reason for the slower progress," said rower Paul Gleeson.

After learning that ice choked much of the route ahead, the group decided to end their trip at Cambridge Bay, about halfway to Pond Inlet.

There was more ice in the Northwest Passage this year than last year, they said, which had the lowest level in recorded history.

But there's still much less ice than 30 years ago, according to scientific data and conversations they had with locals, says rower Kevin Vallely.

"We said, 'Jimmy, when you were younger, when did the ice go out in Cambridge Bay?' And he laughed said it never went out, it was just ice," Vallely said.

Beavers in the Arctic

They also saw a wildlife that normally does not live so far north, including grizzly bears on the rocky shores — where they might have expected polar bears on snow — and at least one beaver swimming in the Arctic Ocean, said rower Denis Barnett.

"We dismissed it saying it couldn't possibly be a beaver and then about a week later we were talking to one of the locals who said, 'Yeah, there's beavers up here now.'"

"Like, to see a beaver swimming around in the Arctic Ocean is, you know, just crazy," said Barnett.

So, after two months with freeze-dried food and no showers, the crew flew home to Vancouver over the weekend, looking forward to the creature comforts back home.

"It's been really cool to sleep in a bed again. On your own. Without the three lads within six inches of ya," Gleeson said.